Three years ago... maybe four years ago now or five, I met Kevin online in a game called World of Warcraft. My daughter and I were playing the game together and trying to find people to join a guild. He was standing there on his character and wasn't in a guild so I asked him if he wanted to join. He said no and we went our separate ways. A couple of days later he was there again and asked how we were going with recruiting. We started talking, he joined and that was the beginning.

I was taken with him immediately. We quickly became really good friends. He helped Taylor and I along the way. We talked online all the time and the others in the group quickly became upset because of how close we grew. We talked every day for hours about everything. At the time he was married and so was I. We had both turned to the game because of our bad relationships. It gave us something to do with our time instead of just being miserable. Both of our relationships grew worse, we both became more unhappy, but we had each other to talk to about our problems and challenges. And we had each other to job around with and make laugh. He definitely brought a lot of joy to my life when joy was in short supply. He had become my best friend. He was the one I turned to when I needed someone to talk to. He was great too, he would listen and offer advice. I would try to do the same for him.

My relationship with my ex-husband was volatile. I had been very suspicious that he was cheating. He hadn't been sleeping in our bed for years. He would stay up really late on the computer and then just ended up making a bed up downstairs and that is where he stayed. That must have gone on for a couple of years. I was so unhappy and I finally made the decision to stop being miserable. I filed for divorce and we decided to try to stay living in the same house. That lasted for quite some time; a year or more. And it was awful. It only got worse. He would come into the bedroom and start arguing with me over everything. And as always, Kevin was there for me all the time.

I finally made the decision to move out with the kids. We found an apartment and moved. That was an ordeal on its own. Two weeks later he flew his girlfriend out to Georgia from California and moved her into our house. My one constant in all of this was Kevin. He was my shoulder to cry on, the one that could make me laugh, and the one person that was always there no matter what. At this point my feeling for him had grown a lot.

Kevin was due to move from Townsville, Queensland to Brisbane, Queensland with his wife. Their relationship was as bad or worse than mine had been. The company that he had worked for for over 10 years had closed and filed bankruptcy. He was a contractor so he was out over $6000. He had found another job in his trade, boilermaking/welding, but they were barely making it. He had talked to his wife about finding a job, but she wouldn't. She didn't even have a driver's license. He had to drive her every where. She headed down to Brisbane ahead of him and he made last minute arrangements to get the rest of their items to Brisbane. He really struggled with going down there, but finally left and was on his way. He left a good job behind only to go to Brisbane to search for a job. When he got down there he was out looking for a job every day. Nothing was happening, but he was trying. She wasn't looking for a job at all and their relationship was beginning to come to a breaking point. She got his phone one day and saw a message from me. She went off on him about not finding a job, talking to me all the time and then started to bring up things about his previous wife. That right there was his breaking point. Kevin takes a lot of things to heart and he blames himself for a lot of things. It is something he struggles with every day. And bringing up his previous marriage was striking at his core. He just took some of his things and he left; he was done. He packed up and headed back up to Townsville calling me along the way. He left with nothing but his clothes, car and his motorcycle. He camped in campgrounds along the way that I found online while he was driving. I didn't sleep very well that night; I was worried about him. He made it back up to Townsville and was staying at a campground. Here he was with no job, no home; it was awful. He was able to get his job back that he had before he left, but it took a couple of weeks. We were able to get him settled into a caravan park cabin after that. It was much better than camping out in the weather.

In Australia you have to be separated for a year and a day before you can file for divorce. October 29th is the day the count down started. A lot happened in that year. He bought a caravan and he ended up leaving Townsville when his job ended. He went to Orange, NSW. Then he went up to Laidley, QLD and then finally to Oakey, QLD where he stayed for a while. We dealt with his health issues and he took a class, looked for a job. We were so close, talking every day and sharing everything. Helping each other through all the challenges of life. He is and was my very best friend and I loved him so very much.

In October of last year he filed for divorce. In December he made his way to us here in the USA. He was able to stay for three months before he had to go back. We took advantage of all of that time and it was great. We have so much in common and we just fit together well. It was so comfortable like he had always been here, like he was meant to be here. He has brought Jesus into my life and joy. When he left we filed the paperwork to get him back here and that is where we are now; just waiting.

We have such a good relationship. It is so different than from my first marriage where David was very controlling and harsh. He would tell me what I was thinking or feeling and that's just how it was. He wasn't supportive at all. He would undermine me in front of the children. It was just bad and very unhappy. I never realized how unhappy I was until I got out of that marriage. It was scary though, because I had never lived on my own and now I was moving out on my own with three kids in tow. I had gone from my mother's house to marriage with David. And my mother and my sister couldn't stand him.

With Kevin it is so different. He is happy to see me when I get home. He is supportive and loving. He always backs me up with the kids no matter what. It is such a shocking difference and so wonderful. Oh, and my mother and sister? They absolutely love him. What a nice change!

So that is the story of Kevin and I and how we became. He is my very best friend in the world, literally LOL I can't wait until he is back here with us. The best thing Kevin has done for me is bring Jesus into my life. I was missing that before. He is the shepherd that showed me the way back. I am so thankful to him for that. 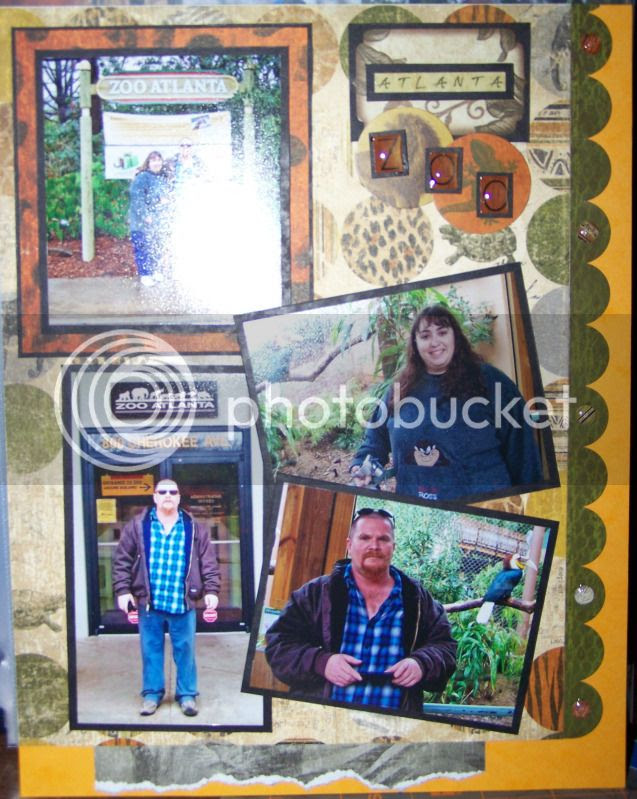 This is the first page of our visit to the zoo. Bo Bunny Zoo papers, Perfect Layers I use on my matting.. My favorite tool! I used Diamond Glaze on the Z O O letters to make it pop a bit and along the circles on the edge. 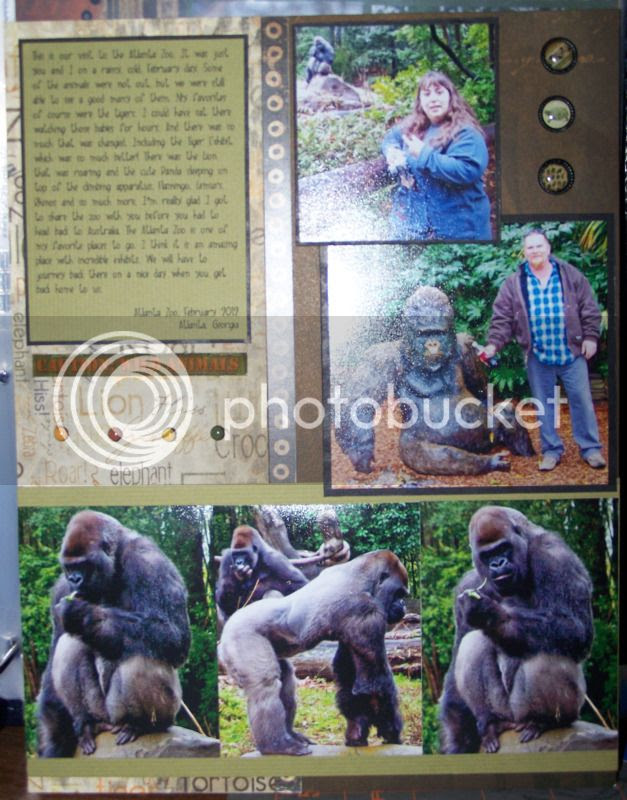 More Bo Bunny papers and brads. And my cardstock is Bazzill. Can't remember what font I used for the journaling. 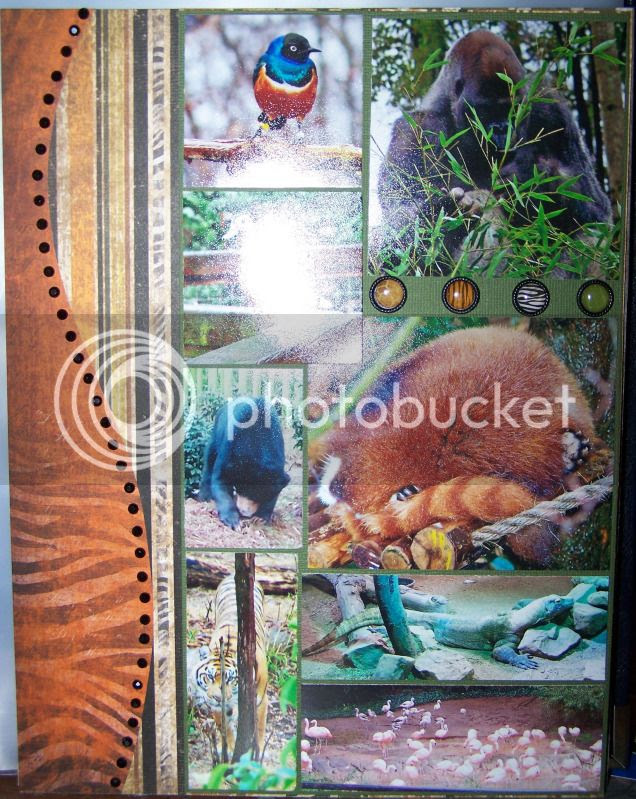 Just trying to get some pictures of the zoo on these last two. Bo Bunny papers, rhinestones that I glue myself.. less expensive and Bo Bunny brads too. Bazzill  Cardstock. 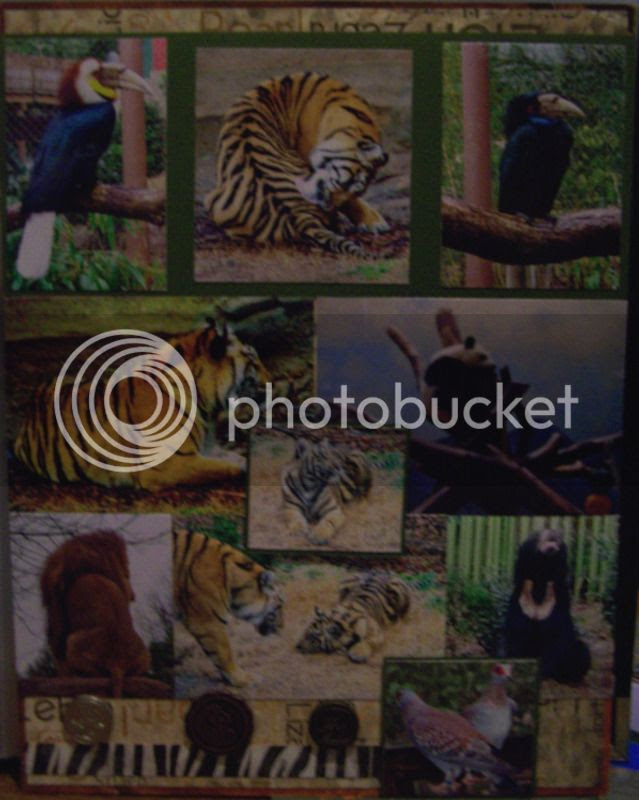 Just a bunch of zoo pictures and the final page. Bo Bunny papers, Bazzill cardstock and Bo Bunny Brads.
Posted by Unknown at 5:27 AM

Wow...what a story! I'm glad things seem to be going well right now! We all deserve someone who is happy to see us when we get home! :)

It sure sounds like you found a keeper! A husband who is also a friend, a best friend, is a wonderful thing. Your pages are really cute. That looks like a really fun outing!

Thank you for looking :) He is definitely a keeper.. I just can't wait until he is home! I don't know how these women in the military do it all the time!