Getting into scrapbooking again, the one new thing that has really stood out to me are the Copic Markers. Wow! I have seen some amazing coloring done with these markers. And I'm like a little kid;  I LOVE coloring! Looking at how great everyone's items turn out I have set out on a quest to get some Copic Markers and learn how to color with them. Yesterday, I colored my first piece with Copic. I was unable to find the greens that I wanted so the greens were colored with a different marker, Spectrum Noir. These are alcohol based markers that are suppose to be pretty good equals to Copic. I'm not sold on that though. I need to play around with them more, but I don't feel like them blended as well as the Copic. There are not enough shades of each color to really find what you are looking for to blend together. Again, I've only used them once so I will have to play around with them a little more, but my first time playing around with both I felt the Copic were better suited for my artistic abilities. The one thing I did like better on the Spectrum Noir is that they have the Broad tip and a fine tip which I find easier to color with. I find it more difficult to color with the brush tip that is on the Copic.

Here are the flowers that I colored. I found something online that said to heat set your printed image and the black will not bleed. It really works and I have found a use for my iron that sits in the closet and NEVER gets used. I HATE ironing!! LOL So I heat set the image by ironing with dry heat iron on the paper. The flowers themselves and the vase were all colored with Copic. The leaves and stems were colored with the Spectrum Noir.The flowers were from Beccy's Place Here. Now I need to make a card to put these on. 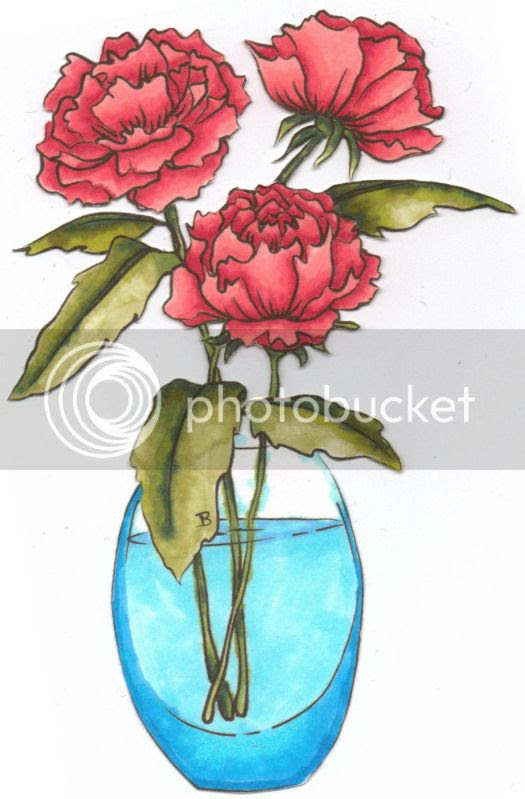 My day did not go as I planned. I didn't get anything done! I did my little bit of shopping in the morning. I came home and unloaded the groceries. I had an incident a couple of weeks back with little bugs in some opened up potato flakes. It REALLY made me want to spew; I hate bugs! So the cupboard was completely cleaned out and everything and anything that was opened or they could have gotten into was tossed. Then I invested in more lock and lock containers and everything in my closet is in containers now. I even bought bread containers so all of my bread is locked away. The point of that since I got off track LOL is that when I came home from the grocery store I took everything out of their containers and put them in my lock and locks.

After visiting Archiver's and Michael's and not finding the shades of Copic that I wanted they sent me to a rubber stamping store not far from here that I didn't even know existed. It is called Rubber Stamping Fantasy. Apparently, they have been there for 18 years, they are about 5 minutes from home and I had no idea they were there! So, I went in there looking for the Copic greens that I couldn't find. They didn't have them either and they sent me to the Spectrum Noir.

After that I came home to make dinner, color my flowers and that was it. Not how my day was suppose to go. Oh! And my youngest, she is 10 years old, decided she wanted to make some cards. My dining room table is still full of the stuff she was using. She was having a good time though. I enrolled us in a class at Archiver's for next Saturday. She is so excited! We will be making a little mini album. I think she is counting down the days.

Now, I will see if I can get some pages finished and maybe even a card for those flowers. We will see!! I hope you all have a great day!
Posted by Unknown at 5:05 AM

What awesome coloring! How fun that you found a new store - love it when that happens. I'm so jealous you have Archiver's!! Loved your last post too, with your cute pets! Have a great day!

Love the coloring!! Amazing. Good luck finding your Copics. I love my Lock and Lock containers too!!