Bailey is my youngest.. she will be 11 on the 24th of next month. She is beautiful, has a great personality when you get to know her and has the most beautiful eyes. She can be really quiet if she doesn't know you.

She struggles in school with spelling and talking too much. She doesn't do well in writing, but I think part of that is the spelling and the other part is that she doesn't seem to know how to get what is in her head down on paper. It tends to be jumbled and not make sense a lot of the time. This is something we will have to work on. She barely passed the writing portion of her big test last year.

She is really terrible at blaming everyone else for everything that happens. She is one of those people that nothing is ever her fault. I'm really trying to work on that. I am not like that at all. I always admit when I make a mistake or I've done something wrong. I am only human. I'm trying to teach her that as well.. that it is okay to make mistakes and it is better to own up to it than to try to pass blame. She is a little better, but this is something that we will have to continue to work on.

She is also one of those people that has to "one up" you. You will say that you have a cut and she will have a sprained ankle. I have no idea where that trait came from, but it has to be the one trait in Bailey that I dislike the most. And the bad thing about it is that I have no idea how to correct that behavior. I try to point it out when she does it.

Once her older sister left the house she really stepped up the plate. She has been helping out around the house without much complaining. She gets the dishes done each night when it is her night. I never have to worry about waking up to it not done when it is her day.

I always felt like I wasn't really close to Bailey. She was always really close to her father and wanted to be around him, even if he wouldn't pay attention to her. She would play in the room downstairs while he was on the computer just to be near him. Once her father and I divorced I felt like her and I got a bit closer, but I really feel like we have grown closer since Taylor left the house. She has opened up more and wants to do things together. We are going this Saturday to a class at Archiver's. We will be making a Doodlebug Mini Album. She is really excited about going. In fact, she reminds every day.. "Don't forget about Saturday!".

Bailey did really well on her CRCT testing this year. She was above standard on almost everything. She really excels at Math and Science. That is definitely a girl trait in our family. I have always excelled and enjoyed math and science the most. So has Taylor and now Bailey. Michael enjoys the writing and Social Studies; Yuck!

She finished up the fifth grade this year; last year of Elementary School. Next year she will start 6th grade, which moves her up to the middle school. Her brother and her will be attending the same school, which also means that I will not be here when they head off to school each day. I really hope I can get Kevin back here by the time they start school or soon thereafter. I need him! It is so great having him here to get the kids off to school and to be here when they get home. They don't get on the bus until a bit after 8:30 am each morning. I am already at work and have been for a couple of hours.

So, Bailey will be my little crafting buddy. I posted a couple of pages she did a couple of posts back. She is pretty talented! She is really a great kid and it has been really nice getting closer to her. 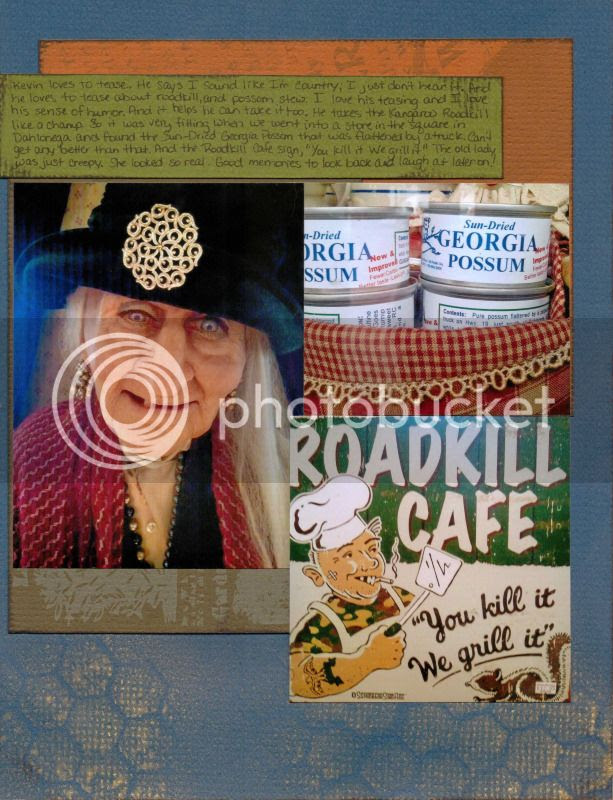 The old lady is creepy LOL  And she looked so real!! I used gold glimmer mist to keep with the gold theme of Dahlonega. Kevin likes to pick on us about living in Georgia and that we eat Roadkill. It couldn't have been more funny when we walked in a shop in Dahlonega and saw the Sun-Dried Georgia Possum and Roadkill Cafe sign. I used all club scrap papers, my favorite black ink pad by Palette, The Crafters Workshop Chicken Wire Template for my misting, and the journaling hand written with my favorite Millenium pen. 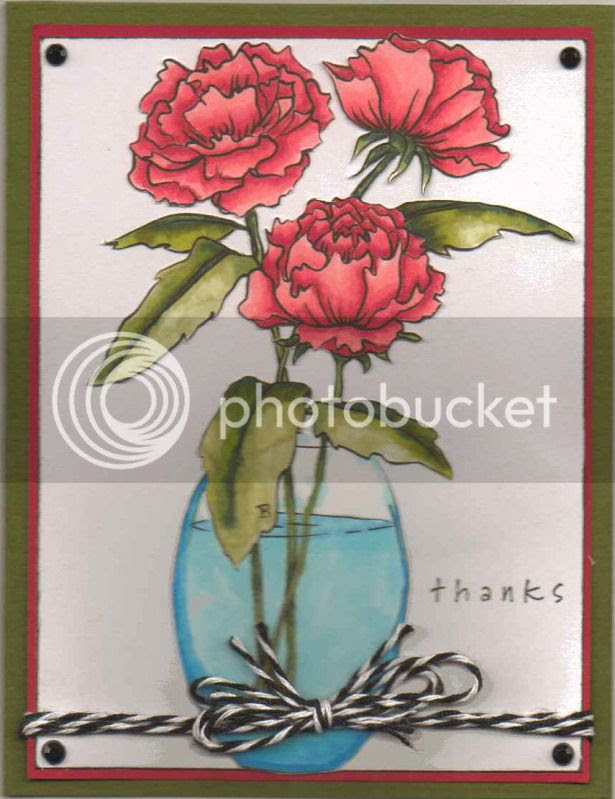 I wanted to get my first try at coloring with Copic on a card so I threw this together. I used all scraps for the card. The "thanks" was taken from part of a Stampin' Up stamp. I used the black and white twine from The Twinery and the black rhinestone gems. Entered in Challenge Filler'er Up @ 365 Cards

Thanks for looking and I hope you all have wonderful Thursday!! Woohoo!! I love Thursdays because I get to work on home on Fridays!!

What a hilarious layout! You're right, she does look real!

Love the layout, and that card is gorgeous!!!