My lunch with Taylor yesterday went well. I told her exactly how I felt about her leaving. I really needed to get that off my chest. I asked her about her job, we spoke about her car and what she needed to do to take care of it. I told her she needed to appreciate what my mother and sister did for her by repairing that car. It was over $850 to repair it. I spoke with her about school and when she was going. She is not rooming with her friend, so I'm pretty happy about that. Her friend and her boyfriend are both going to the same school as her. The funny thing about that is that neither of them had initially planned to go there. Her friend pretty much had it planned that she was going to the University of Georgia and her boyfriend had planned on going out of state. Some how that all changed. We spoke about what she was going to do for the holidays. I was hoping she would come home for the holidays and she said she would. So all in all it was pretty good. One thing really bothered me though. She is living with her girlfriend, her girlfriends mother and stepfather. Apparently, the mother and girlfriend have been gone all week to Florida. She is living in that house with the stepfather! She has always been one to put herself into weird situations like that. I kept my mouth shut though. I couldn't get into a fight with her about that and she knows how I feel about things like that. I brought her back home to see her siblings. Everyone was happy to see her. Then she left for work in her car. I hope she will do what is right by my mother and sister. She really needs to show them some appreciation.

Today I get to go visit with Jianna! Jia is my very best friend. We have been friends since my oldest was in elementary school. Several years ago she went through a terrible divorce and moved out of state to Ohio. I miss her terribly! She came in town yesterday and is staying with her brother in Madison. I will be waking the kids up at 6 am. That will give them an hour to get themselves dressed, teeth brushed, hair brushed, etc. Then we can head out. She is really awesome :) I can't wait to see her.

I did scrap a page yesterday! It is just a page of Kevin and the kids when he was here at home. I see so many pages with just empty space and I really tried. There was a lot of empty space. I couldn't do it! I had it scanned and everything, but I just kept staring at it and ended up adding to it. I don't know what it is, but I can't do empty space LOL Another thing I can't do is crowded embellishing. Where there is so much embellishment that it almost loses the photo. Or you really have to look to find the photo. It's just not my style I guess. So here you go.. still working on that 8 1/2 x 11 album. I will be glad when I'm finished. 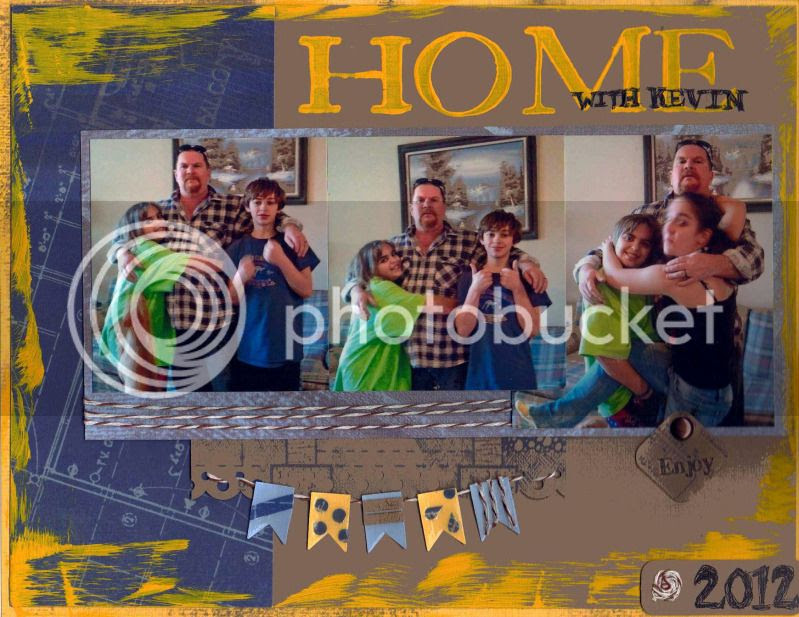 All of the paper is from Club Scrap. This is an old kit that I received before I stopped scrapping for so long. I absolutely love the quality of their papers. I used paint and twine.

When I finish with this album I'm going to finish the small album I was making my sister about her bout with breast cancer.

I LOVE this LO! I'm always wanting to try the "paint thing" on my lo's or cards but just never work up the nerve! What a great job you did here!
And, I'm so glad thing went so well with your daughter.

Have a super day with your bestie!!

Thanks Becky! I don't know what it is though.. I just can't have blank space.. its so weird.. It almost feels wrong LOL I can't stand it. I'm twisted!! LOL I'm glad you like the layout :) I LOVE paint! And thanks about my daughter :)

Terri.. I had a great time today.. I'm exhausted though!