I have struggled with Faith and God since I can remember. At first it was me blaming my parents for forcing me to go to church when I didn't want to go. They changed churches so often I never found my place in one. I just didn't like to go to church. As I went through my twenties and into my thirties it was so much easier to just explain that I have a scientific mind and everything has to make sense to me. And science just makes sense. The Big Bang Theory just makes sense. No one could tell me any different. They would say all kinds of things to try to convince me otherwise. And then came Kevin...

I tried to pull the same thing on Kevin, but he was the one to open my eyes. He always knew what to say. The Big Bang Theory? He would say, and where did the stars come from. Gases I would say only to get the reply, and where did the gases come from? The very beginning had to start somewhere. He really opened my eyes to Jesus and faith. Kevin isn't the most patient man in the world, but he was always patient when it came to explaining something about the bible. He went back home and went to visit his Aunt. It was a really nice weekend for him full of family and talk of faith. I was so glad he was able to spend time with his family that he hadn't seen in so long. And I'm glad he was able to be with people he could talk to. I'm pretty ignorant of the bible so he has to do a lot of explaining to me. That has to be exhausting LOL :)  Over that weekend I made the decision to find a church for the kids and I to go to; I invited my mother along as well. So the journey began...

Kevin is Pentecostal and so I began my search for a local Pentecostal church. I came across a church, Mount Paran North .We went on a Sunday that they were beginning a four week series called "God Quest" and we were there for the first week. The sermon focused on why god is real and the following weeks all went back to that initial focus. It went through the history of it all and how so many things point to everything written in the bible being true. It really put everything into a perspective that made sense to me. It was amazing that I was guided to this church at this particular time. It really helped to open my eyes and see; it is just what I needed to hear when I needed to hear it. We went back each week through God Quest and the whole series was amazing. The pastor is amazing and I really enjoy listening to him each week. I had several churches that I was going to explore to see which was a fit for us. We haven't left Mount Paran since we began our journey.

I worked on another layout for the album headed to Australia. This was a page on Acworth Beach. It is a local beach at the lake here. It's a really nice area. I enjoyed taking Kevin around to the local spots we have enjoyed over the years. We will definitely go back there once he is back. 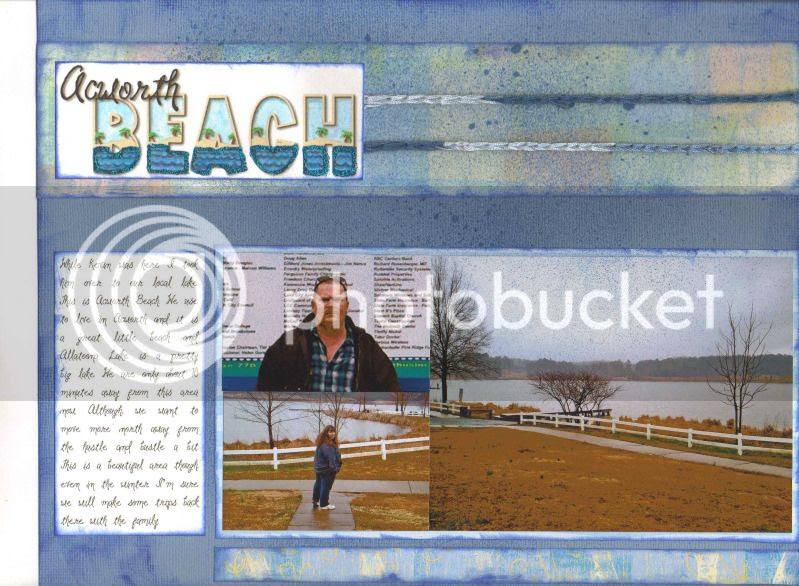 I used Bazzill and I'm not sure what the patterned paper was. Nothing written on the back to identify it. Some fire that I had, cranberry ColorBox ink, blue stickles and sapphire glimmer mist. I also used my Derwent watercolor pencils to color in "Beach". The two fonts I used were Ahoy Sand Dollar and LD Beach.

Thanks for looking and I hope you all have a wonderful and blessed Tuesday!

Congratulations on finding a Church! What a blessing Kevin is!

A beautiful page - Your title is fantastic - so eye-catching!
-Jasmine
alittledabofglue.blogspot

what a lovely page!! fabulous misting and inking!!!
Thank you for your lovely comment on my banner!! I really appreciate you stopping by!!!