Apartment Living and the Last Dining Out Layout

We have lived in this apartment going on three years. It was really nice when we first moved here. I really hadn't been out on my own. I went from my mother's home to living with my husband. It was a scary transition moving out on my own and with three children in tow! We moved to a nice apartment in a nice, safe area. It was really good to get my feet on the ground and be on my own. I tolerate the noise well, because you will always have noise in an apartment.

We have lived here for the two and half years without any complaints. The rent gets paid on time or early and we take care of the place and we don't complain. We had some new neighbors move downstairs from us a while back.. maybe 6 months or maybe a bit longer? It is a young couple with a young daughter that just turned 2 years old I believe and they have a medium sized dog. He has a military sticker on his vehicle, so I'm not sure if he is military personnel or civilian working in the military? No idea there. They are not very friendly people. They don't acknowledge you, they don't say hello or even smile back at you when you smile at them. They don't speak at all. I'm not use to that.. most of the people around here acknowledge you. I'm not very social, but I do try to be kind and say hello or smile.

We hear the neighbors fighting ever now and again.. they can be quite loud with their yelling. We live upstairs from them, so we don't hear any other noise from them. They complain on us constantly. They tell the office it seems like we are moving furniture around all the time. I can assure you we aren't moving furniture around all the time. It is myself, Bailey and Michael, two cats and a 25 lb. dog. It got really bad over a few months. There was one instance that we were watching a movie and had the surround system on. Apparently the bass was too much and they could hear it. I had no idea.. I have since then turned the surround system off so we don't have that problem. They say they could hear music playing one day when I was listening to music on my computer. I can tell you I wasn't listening to my music very loudly. The husband has banged on the ceiling a few times very loudly. One of those times was when Bailey tripped over the threshold coming in the front door and fell. Another time was when Michael fell.. errr.. got pushed off the couch in the living room. One of the times was the night before last and I can't figure that one out. I was sitting at the computer/scrapbook desk working on a layout and all of a sudden BANG BANG BANG! It felt like it was right below me.. the floor vibrated under my feet. Bailey was standing at the counter in the kitchen pouring orange juice and Michael was outside taking T-Bone for wee. It just doesn't make any sense at all.

I went through a period where I really lost it.. I was angry all the time.. every day they were calling and complaining. I found myself yelling at the kids to walk softly.. yelling at the cats for jumping down to heavy.. or the dog for wrestling around with the kids. We weren't living here.. it was like a prison. I prayed and I still pray about the whole situation. It has definitely gotten better. Yesterday was the first time I've heard them bang at us in several weeks. I have been able to let go of that anger. I feel sad for them. They seem unhappy and I don't know the situation in their household. The neighbor below them says they are really loud and they say it is the dog, but she thinks it sounds like fighting.. big people. I'm not sure what it is, but what I really need to do is add them to my prayer list. I will not get angry at them again. I have found peace with that and I am certain we are not that loud.

Yesterday was an odd day. They had issues with water on their ceiling which apparently came from up here. There was a broken pipe in the wall behind my washing machine. They came in and cut a hole in the wall to find the leak. They brought in a plumber and he repaired it. It was really loud when they were cutting the hole and making the repairs. Maybe they got agitated with that noise and it just rolled over to the evening and he was just having a bad day because of it.

On to the layout LOL Glad to get that out of my system... makes me feel better to get it out.. I feel better about it all now. So, the layout is the final page of the Dining out three page series of the family going out to eat together. I needed to add some journaling to these pages and I used the last page for that. I used Sketch #214 from Creative Scrappers. Of course I had to adjust it to my itty bitty 8.5 x 11 page LOL Oh I'm so over the rectangular pages! They have great sketches over there :) 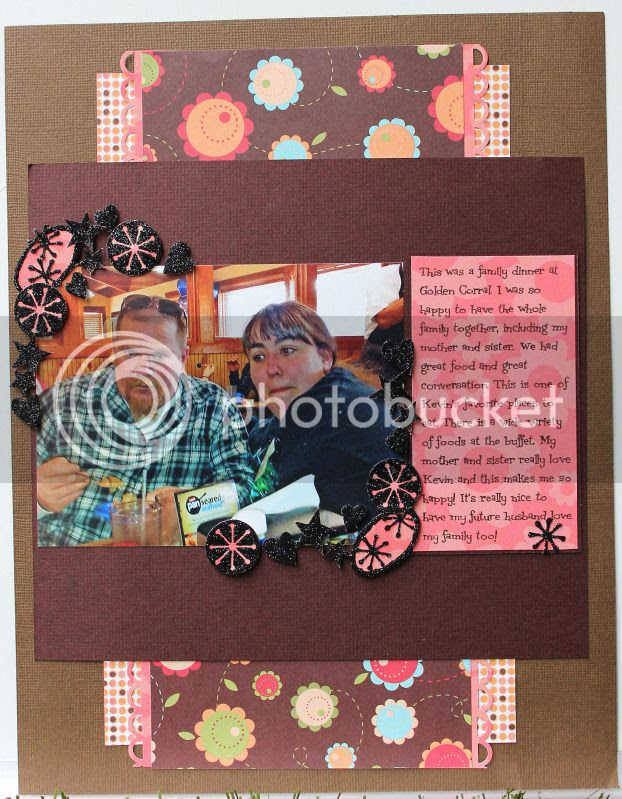 I used the same patterned papers that I have no idea who's they are, bazzill cardstock, and the same Retro Road Trip stamp set from Unity Stamp Co. I used those stamps to make the embellishments around the photo. I glittered all the embellishments with Barbara Trombley's ultra fine black glitter. Simple layout with one last photo.. I love Kevin in this photo! and my journaling for these pages.

Thank you for looking!! Almost finished! I have the airport photos and then I wanted to throw in a page or two with T-Bone.. Our first dog together :)

Have a really great Monday everyone!!

I won a prize from hopping at the Fun in the Sun hop at ...Joyful Stamper this weekend. Thank you for having such a great hop! You put in your time so that I can find new talented people to follow and get to view all sorts of great projects!!! So THANK YOU!!!
Posted by Unknown at 4:31 AM

Wow, sounds like your neighbors are awful! Let's hope they find a new place and move soon!! lol Very nice layout! Pretty papers. :) Happy to be a new follower! Thank you for hopping along with me for my Well Owl Be hop!