Recover after the 4th

Wow! I was SO tired after staying up late on the 4th. I had a really great time with Jia and her family as always. It was really nice to have my oldest tag along as well. Now that she has moved out I don't see her much or even talk to her much for that matter. So, it is always nice to see her and catch up. 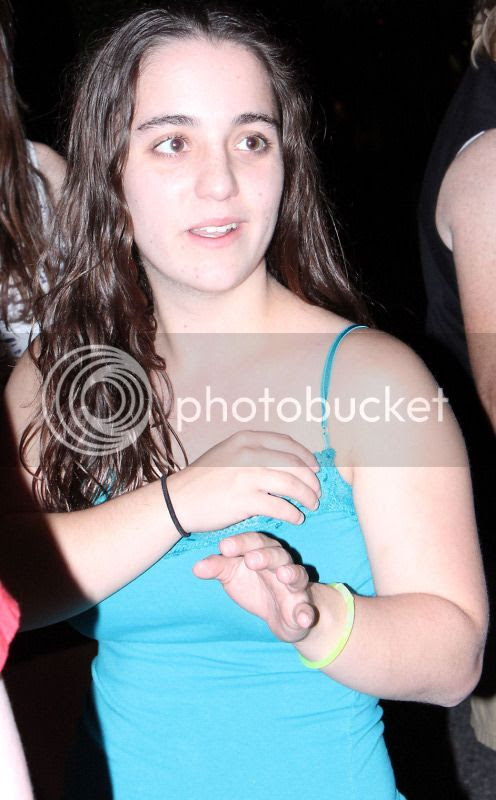 We left out of here early in the morning to head to Grayson, Georgia. I got the kids some breakfast for the trip. It takes about 45 minutes to an hour to get there. When we first arrived Jia and her brother had gone to the store. I got T-Bones crate inside and got him all situated. We really didn't do a lot, but hang out and talk. We always have a lot to talk about. The kids watched a couple of movies on and off. We had a great lunch of hot dogs, baked beans, mac and cheese and all the fixins' for the hot dogs. They even made sloppy joe sauce for the hot dogs.. Coney Dogs they called it. It wasn't bad.

Jia, her boyfriend Rob and I went to the store at one point. I'm still trying to figure him out. I'm really not that crazy about him. It's just the little things that he does. They have been dating for quite some times.. it has to be four or five years now. He has never been married.. the ultimate bachelor. So, we go to the grocery store to pick up a few things. We need ice, water and playing cards. Rob picks up a magazine and some beer. We get to the line to leave and he puts his beer out and his magazine. Then he adds one of those things that goes in between two peoples shopping items. He puts it between the water, ice and whatever else Jia got. I'm watching this and thinking to myself.. "No he didn't!". So he checks out and then Jia goes.. her total bill is about $13.00. I can't figure out why he wouldn't just pay for those items. He has no kids.. a really good job.. In other words.. its not about money for him. And he will be eating the ice and drinking the water with everyone else in the house. I don't know.. I was just a bit shocked by it. There were no playing cards there so we went down the street to the drug store. Jia asks him to run in to the store and grab some playing cards. He tells her no! So, I tell her that I'll run it.. I run it and grab the cards and back out. Again.. SHOCKED! that he wouldn't do this simple thing for her. I've only met the man once before.. and he didn't make a good impression then either LOL! Maybe I'm just too critical, because I feel like she deserves so much better. She is my best friend!  Oh.. and then he got upset with her about something and wouldn't even be with the family when we went out to see fireworks. 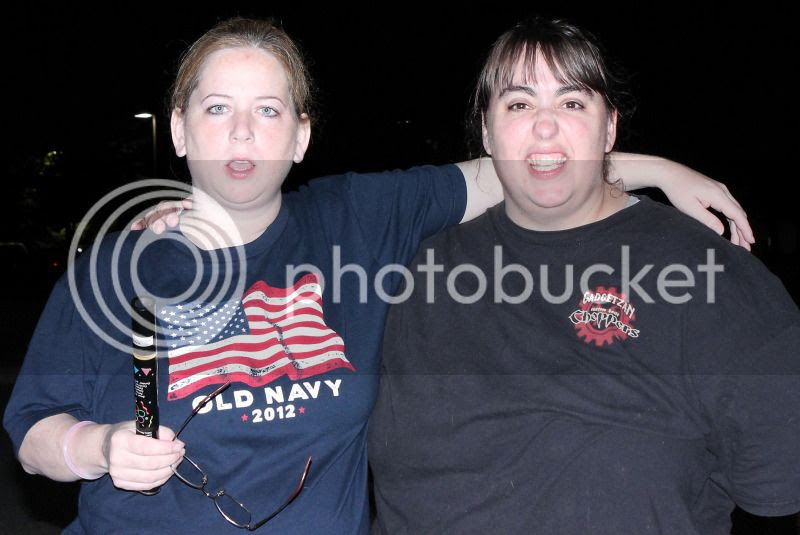 
So that was it.. after the fireworks.. which we really didn't see, the kids and I grabbed T-Bone and started home. Oh... if I had only known what was coming! 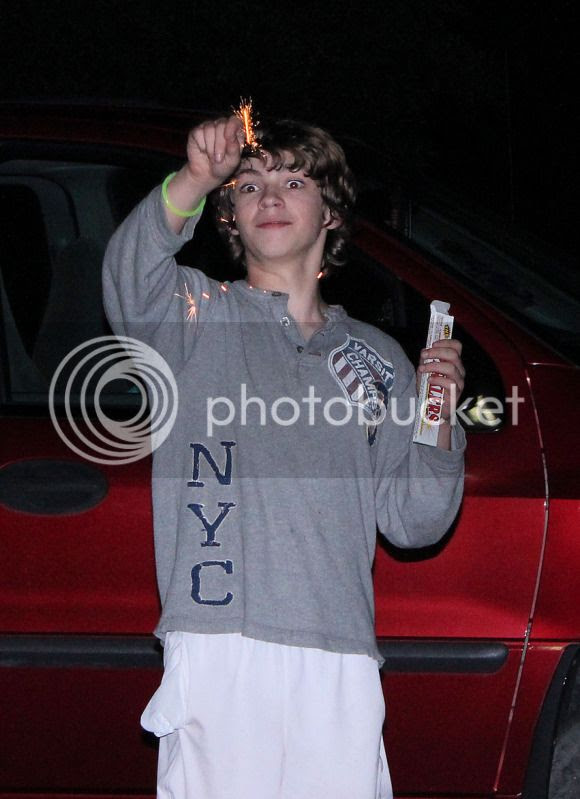 Look at my lovely handsome boy.. Okay.. kind of scary right there LOL Yep.. he's a special one! So, we head home and we are about 15 minutes down the road when all of a sudden Michael spews! Not once... not twice... but FOUR times! Now, how is it that you don't feel that coming? How is it that you don't say.. MOM!!! I need you to pull over.. I don't feel so well! Nope! He is absolutely covered.. Bailey has some on her.. T-Bone has some on him. What a nightmare!! It is 11:30 pm on the 4th of July and we are still a good 45 minutes from home. I stop at the next gas station we find and I buy a gallon of water, a small water for him to rinse out his mouth and drink, some handy wipes and paper towels and Febreeze! Thank goodness I made him bring a change of clothing thinking I would be able to get him to go swimming. I piled everyone in the van again and I went across the street to a vacant parking lot.. still in a lit area and cars not that far away. He washes off with the handy wipes and the gallon of water and paper towels. I'm trying to scrub the van seat and floor as well as I can. Taylor and I coat the seats with febreeze.. which didn't really help very much. Bailey and T-bone were both rinsed off with the gallon of water and Michael was sent to the back of the van to get out of the soaked clothes. We were probably out there for a good 30 to 45 minutes trying to get cleaned up. We climbed back in the van and started home. The febreeze did not work. I ended up having to drive home with the windows down the entire way. I'm just glad it had cooled down some. So that was our night.. Michael really threw a kink in it on the way home LOL Oh well.. Life happens and a mother's job is never done.

We got to bed late and I ended up talking to Kevin for a bit in the morning and then laying back down. Before we knew it we looked at the clock and it was already 3:45 pm. The day really flew by.

I worked on a card yesterday, trying to finish it up. The day before I had spent all my time coloring the image. Well.. I colored four images and it took quite a while LOL I used all scraps for this card. 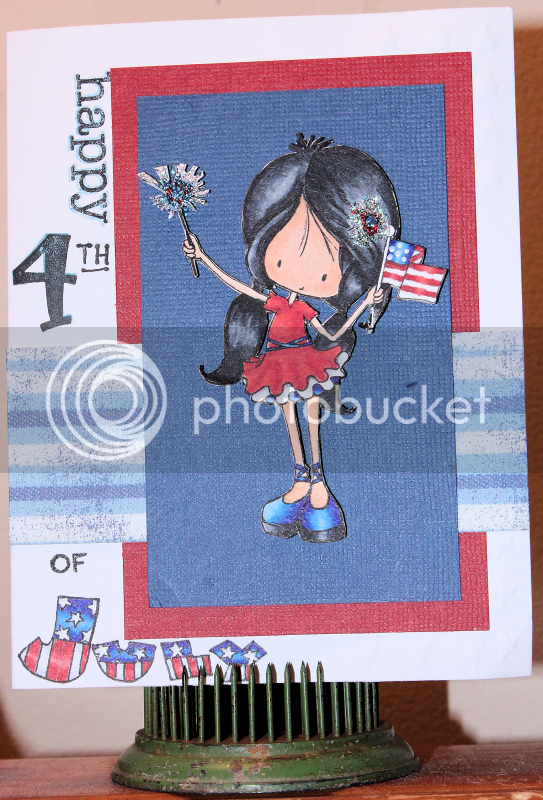 The girl is from Tiddly Inks Digitals - Wryn the Patriot. I think she is so great! I used Copics B21, B24, B29, C2, C5, C7 and C10, E00 and one other brown .. I can't remember which one. Also R20, R22, R24, and R27. I used a fine Painters white opaque paint marker for the dots... err Stars on the flag. I also used "happy" from a hero arts stamp set - Essential Messages, "of" from a paper smooches stamp set - Word Salad and the "4" was from a Stampin' Up set of numbers that I have. The "TH" and the "JULY" were all hand written and colored. I used some glitter glue for the sparkles in her hair and the actual sparkle.. I used red, blue and white. Still working on my Copic coloring... Black I find is not that easy to work with.. well.. its really the different shades of gray, but still not that easy.

I'm going to enter this in the following challenges:

I have one more red white and blue card to go.. so I'll use that to enter in the rest of the may Red White and Blue challenges this month! :)  Hope you all have a great day!

Well at least your card is darling even if your 4th was chaotic! thanks for sharing with us at MEFY!

Great card. Love the little gal. And using all scraps is my favorite thing to do.

Great job coloring your image, love her hair! Thanks for playing with us at Freshly Made Sketches.

Adorable card for the 4th. Thanks for sharing your art in the Creative Inspirations Paints blog challenge.

How fun!!! What a cute and well coloured digi. Love it! Thanks for sharing with us at Made Especially For You!

Thanks for sharing your card with us at Made Especially for you this week. Lovely card and your coloring is great.

This is beautiful and perfect for CI Paints Inspired by: Independence Day Challenge. Thanks so much for sharing and playing along with us this week! Hope you see you back next week for a brand new Inspired By Challenge!!
Jessica
CI Paints~DT

Such a fun card! So cute!!
Susie

Thanks for joining us at MEFY!!

This is perfect for our current challenge at Pattie’s Creations. Thanks for joining us!
Hugs
Pattie ♥

Thanks for playing in our 'Color Combo - Red, White, and Blue' Challenge #47, and for using a Digital OR Stamped image!
Sandi ♥
DT Coordinator for Pattie's Creations Challenge!
and Pattie's shop
Home of Pattieboop and Allie!