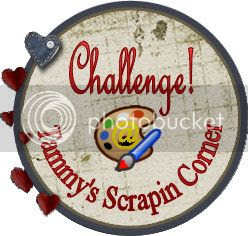 The theme this week is Challenge #21 - Anything Goes!  I made two cards for this challenge. The first card I used Candy Cane from Floppy Latte: 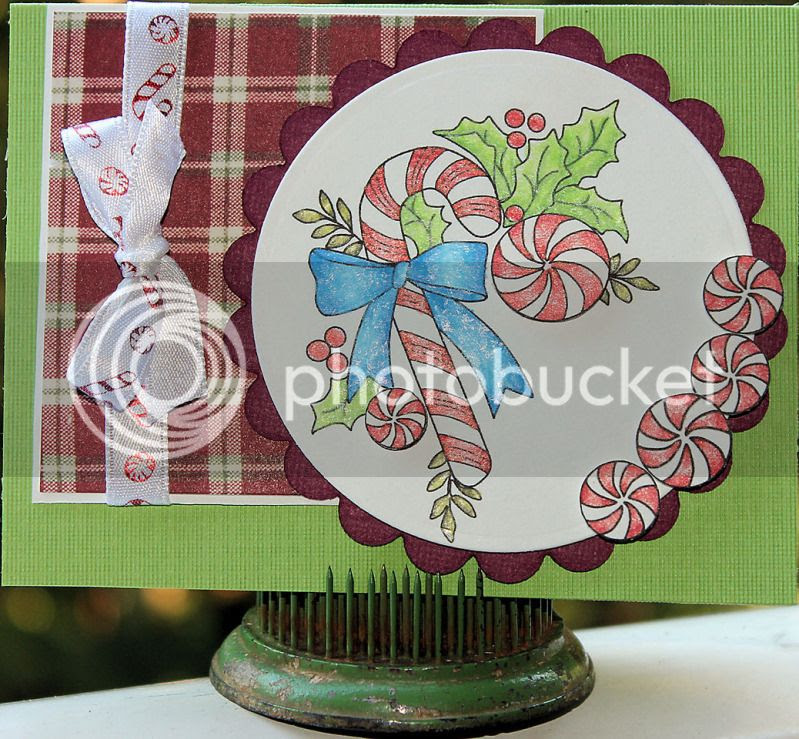 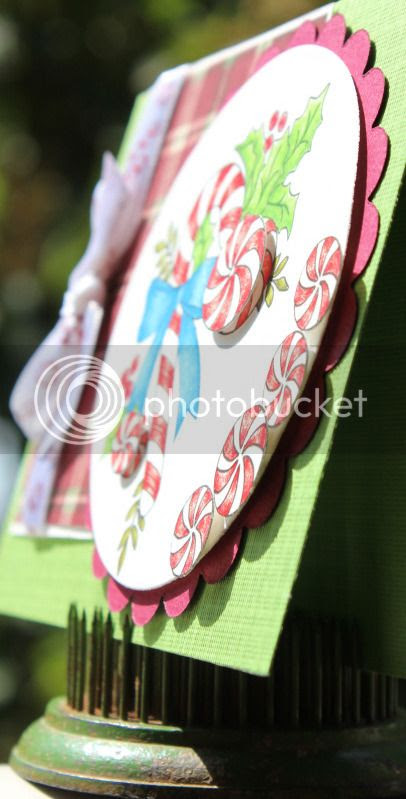 The photo really doesn't show the coloring that well in the 1st photo.. Oh well. All of the paper is scraps. I used die cuts for the circle and the scalloped circle. The ribbon is from my stash. I colored with Prismacolor Pencils and I duplicated several of the candies and popped them. You can see some of the dimension on the 2nd photo.

The 2nd card I used the image Butterfly Love from Stitchy Bears: 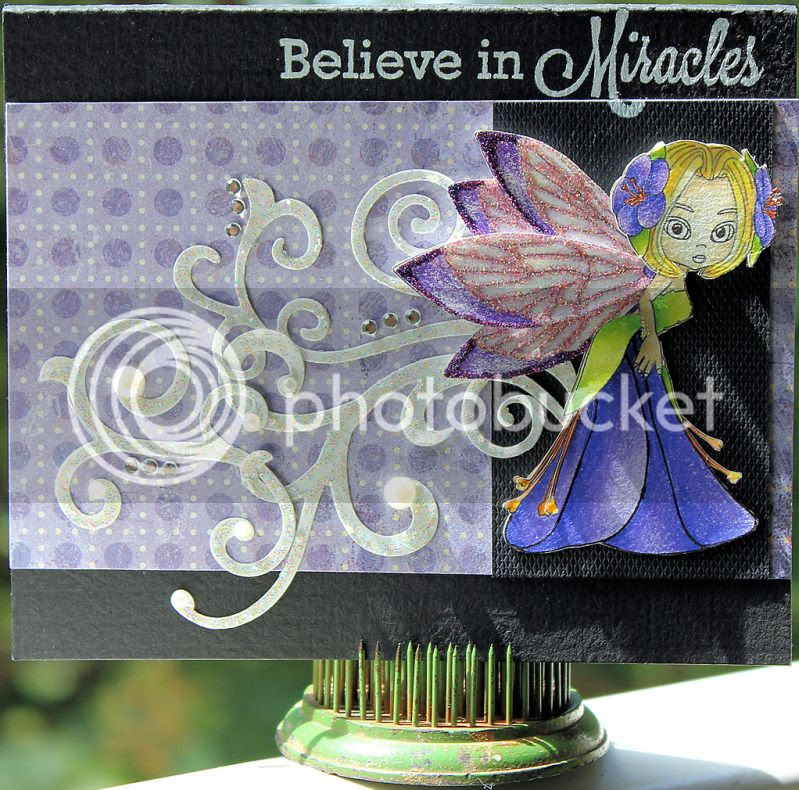 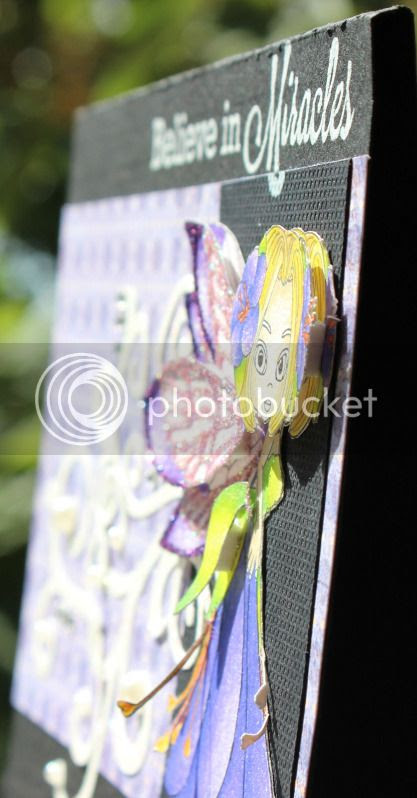 I used scrap papers, the die cuts are sizzix. I added pearls to some of the ends on the swirls and I added rhinestones to a few sections of the swirls. The image is colored using Prismacolor Pencils. I used a couple of glitters from The Art Glittering System - Grape and Wild Rose. I used them around the wing. The darker purple right on the edge of the wing and the Wild rose on the inside of the wing. I used Ice Stickles Crystal on the swirls although the photo isn't really showing it that well. I popped and did several layers with this one. The very top wing is popped the highest and then the wing part right below it is popped just a bit lower. . You can see some of the depth in the 2nd photo.

Friday morning I woke Bailey up early and we went shopping for school supplies. I did a little bit of grocery shopping as well. Then we came home and I spent the rest of the day trying to figure out how to watch the opening ceremony live.. which by my vent before you can see I never figured out. I did watch it that night and I didn't think it was very good. I mean.. It was a lot about the history of England and I think their history is amazing, but I don't know.. there were only a couple of things that really stood out to me. I loved the five flame rings coming together and then raining down fire. I thought James Bond picking up the Queen and then parachuting out of the helicopter was cute.. and Mr. Bean was hilarious. Just my opinion though ;)

Saturday, we went to my sisters to celebrate Bailey's birthday. We watched the Olympics and had cake. That is the weekend, celebrate with the family deal LOL Taylor came and she gave Bailey some scrapbook supplies. My sister and Bailey went out for a bit.. Okay.. it seemed like they were gone forever, because I was ready to go home LOL But it was a good day. Then I came home, talked to Kevin and watched more Olympics.

Sunday, we went to church.. had to go to a quick meeting afterwards, because the kids and I area volunteering for an event next Saturday. And the rest of the day has been spent making cards and watching the Olympics.. And of course talking to Kevin :)  We are almost at five months!! We should hear something really soon from immigration. I really hope we hear from someone soon!

Wonderful cards! I really love how you have pop them up! That really add to the cards.

Great cards Susan. Love how you've used the pearls on the second one. Thanks for sharing it with us at TG this week.

Wonderful cards Susan. Thanks so much for your hard work. So glad you are on our team. joann sassy raggedy

These are gorgeous cards. Loving your images and design! hugs, Angela

what a fab Christmas card for our challenge this week! Loving that candy cane!

Thanks for partying with the party planners this week!

Beautiful card.Love the added dimension on the fairy.Your other card is fab too.Thanks for joining us at Willow Sketchie Challenge.Hope to see you again next week :D
Lisa x

Both of these are fantastic, Susan! Love the peppermint candies on the first one and your coloring on each one is superb. Fabulous fairy wings!

Lovely creations!! Thanks for joining us this week at DDCC!

Wonderful cards ;-)
Thanks for joining us over at Addicted to Stamps
Hugs
Tasha
xxxxxx

Great Cards. Thanks for playing on Willow Sketchie this week, Hazelxo

Your Christmas card is perfect for our challenge. Thanks so much for joining us at Sweet Stampin' this week.
pssst: i really like the other one too :)

Wonderful cards, love the added dimension. Thanks for playing along with the Bloggers Challenge!

I hope you hear something soon so Kevin can come home!!

Thank you so much for joining us at Crafty Catz this week with absolutely gorgeous creation,

I do hope that you will try to join us again next week,

Good Luck with the challenge
Have a lovely day,
Hugs Bridget :0)

Beautiful Christmas card. Lovely and sweet image ))
Thank you for joining us at Sweet Stampin` “Christmas in July” Challenge and we hope to see you again soon.
Hugs
Natali

Beautiful cards!! Lovely design! Thanks for joining us at ATSC. hugs, Marlies