I was driving into work this morning, I tend to reflect on things in the car and this is where I pray. I try not to focus on the dumb drivers out there and getting angry, which is easy to do. I try to think about other things, just reflect on things in the world and going on in life. Keeps me much more calm when I'm driving.  I also find that if I listen to the local Christian station I tend to be more calm  and slow down. If I listen to the other local station I normally listen to, I tend to really get a lead foot, I speed and I get angry at the people around me! LOL I'm so quirky I know!

I was reflecting back on the Sunday service at church. I was talking to Kevin about it when he woke up on Sunday evening.. his Monday morning. They read a passage in Revelations. Now, if I would have read that passage on my own I would have closed the bible and not known what the heck I just read. I would have thought of horror movies with monsters and dragons and 666. But instead, they really break it down and allow to make so much sense. They really go into the history of the writing and break it down so even I can understand. Then after delving into the history of it, they bring it back to today and it all becomes relevant.

So, what did I learn? I learned that the visions of the beasts coming out of the earth were representative. They represented the different Caesar's; and there were two different Caesar's that they represented. I couldn't tell you the first names of them because.. well... I'm just old and can't remember things like I used to LOL! I also learned that back in those Roman times they used Cryptogram type writings often and that 666 really represented the name Caesar back then. Caesar (whichever one it was) had people stamped with 666 on their foreheads and hands in order for them to be allowed to buy and sell. So, he was pretty much marking them as his property it seems to me. I found it really interesting listening to the history of it all. The service was on "Your Focus" so it talked about how the Caesar's manipulated the people and they lost focus on the Lord. Then they switch it around to today and how we can lose focus on all that goes around us. Anyway.. I thought it was really great and I always learn so much.

After the service I grabbed one of the newsletters they had in the pews. It was about the missions that the church works with. I read the stories and learned things that I just never knew or paid attention to. The church really does some great things. They feed pastors in poor areas of Cuba so that they can reach out to their communities without having to worry about how they are going to fee their families. The one that really stuck out to me was China. Now, If I'm correct, China is a communist country. I know that the government rules over pretty much everything there, but I never knew you couldn't be a Christian. There are a lot of Christians in China, but they are all underground. It is so hard for me to comprehend that you can not choose, because that is all I've ever known. Mount Paran North went to China and taught bible study there to the underground churches. Apparently, there is bible smuggling into that country like smuggling drugs. It really touched me when I read that.

Okay.. enough of my reflecting LOL Too Deep, huh? What's going on? Yesterday I started working on my first card for One Stitch At A Time.. which you won't get to see until August LOL! I also need to work on another design team card that will preview on Monday morning. More to come on that :) And just work work work! Oh! And the kids tend to drink milk like its going out of style! So I have to stop on the way home to pick up more milk and get gas. Exciting days aren't they? LOL

I'm sharing a layout with my youngest.. She will be 11 on the 24th of this month.. this is back when she turned five! I believe the papers are from Club Scrap, but I can't be sure. Have a great day everyone!! 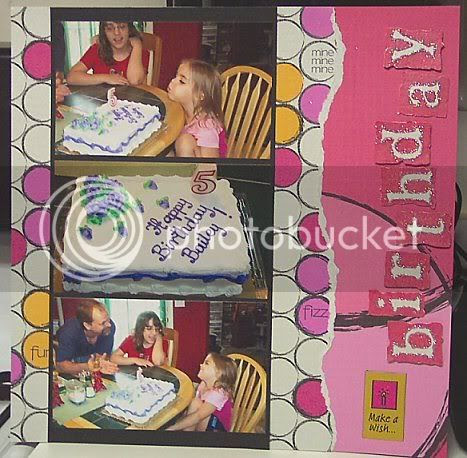 Love the layout!! All that yummy pinkness!!

hard to imagine that Bailey was that little angel . Now i meet her :p