Good morning everyone.. or evening for those of you going to bed soon. And Happy Olympics Eve! The opening ceremonies are tomorrow and I couldn't be more excited. I just LOVE the Olympics. The games have already begun; there have been some events that have been going on. Kevin and I were talking about that this morning... and he makes so much sense ;)  I was surprised that they were going on before the opening ceremonies, but when he said that the team sports take more time because they can only play a game a day.. well.. doesn't that make perfect sense LOL  Just things that I don't think about. The U.S. Women's soccer team played and won... that is all I've heard so far. I will have to do some snooping around today to see what is going on. I also need to find out when the opening ceremonies are tomorrow. I love to watch the opening ceremonies and everyone trying to outdo the previous years LOL It is always a lot of fun.. Okay.. except when all the countries walk in.. because it just takes so long and I lose interest really quickly LOL

What else has been going on? I have been training a temp to help out in another department.. and I hate training people! I've been back and forth and feel like I haven't gotten anything accomplished really this week. Today I'm not going over there so I will just focus and try to get a bunch done.

We have been home since Tuesday... Wow!  That isn't very long is it LOL  No wonder I haven't recuperated!  I feel so worn out, but at least I was able to work on a card last night for OSAAT and I'm almost finished with it. I worked on it some more this morning and when I get home I will put the last touches on it. I am also going to print some images here at work... better printer! I brought my paper and that will give me some images to work with this weekend.

Night before last I was watching Netflix in the bedroom.. dozing off, when all of a sudden I heard a 'POP' and a big flash of light which woke me from doze. My DVD player was fried! I have been having some trouble with that thing for a little while now. I stopped by BrandsMart and picked up a new DVD last night... making sure I got one that I could connect to Netflix. Wouldn't you know!! I paid attention to the Netflix part, but failed to pay attention to the WiFi part. Ughhhh.. so I packed it back up and I'll return it today. I hate when I do things like that. I get in such a hurry that I don't pay close enough attention. Or, I don't read something carefully. This is really a bad habit of mine.. I need to slow down and pay closer attention. i got annoyed when I went in there, because there were about five salesmen just standing around talking. So, I grabbed and ran.. My fault! I should have paid closer attention! I knew what I needed. Tonight I will stop back by and exchange it for the correct DVD on my way home.

Here is a card for today: 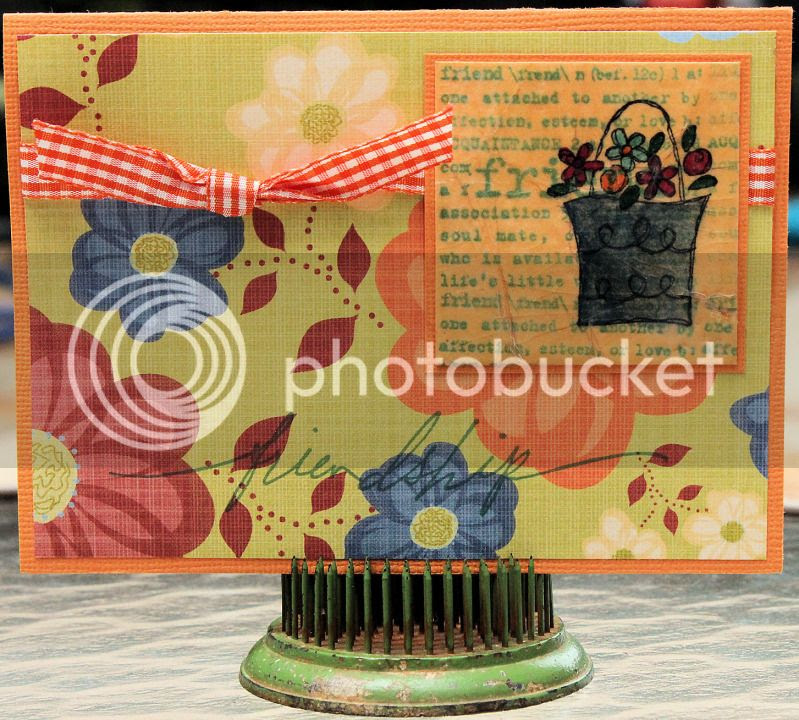 The stamps are from Stampin' Up. Its just pretty simple. The square is covered in Diamond Glaze and then I cracked it. I love Diamond Glaze!

Pretty card! Bummer on the DVD player. Hope you get the correct one tonight!!

Oh what a lovely card, the colours are so pretty... Thanks for joining in with us at ATCs and Cards with Attitude x

so pretty and i love the cracked diamond glaze!!
so glad you joined us on EAD :)