Why Am I The Way I Am

A couple of things happened today that make me take a look at myself. First, I had a neighbor that lived downstairs.. two levels. They moved out a couple of weekends ago and she had two garages that she rented. She managed to get one of them emptied, but the other one she couldn't get done. So, she asked me if I would mind putting the garage in my name and she would keep it for a couple of months and then get it emptied. Now, they really don't know me all that well, but apparently enough to know that I have a hard time saying no. So, she handed over $95 and I told her I would do it. Why can I not say no? I really hate that quality in me. It really opens that people taking advantage of you situation. I can say no if I have to, but I don't do it nearly enough. I get in trouble for that a lot at work LOL Taking on too much. Anyway.. back to the story... Today I went down to the office and told her that I needed to switch that garage into my name. And the manager says to me.. you know you don't have to do that. I know I know.. but I have a hard time saying no. So I ask... When can I cancel it? She proceeds to tell me that I have to keep it until my lease runs out. That is February of next year!! I looked at her and said.. Oh yes.. Ummm.. I can't do that. I head home and I tried to call the lady. Her phone went straight to voice mail. I called her son and told him the situation and told him to have his mother call me. She hasn't called me yet.

Also this morning my oldest daughter calls me crying. She says tuition is due and she still owes a lot of money. I'm trying to be strong and hold my ground with her, but when she calls all crying and not sure what to do I feel bad. But I really need to stay strong... she did choose to move out and become an adult. She is the one that decided she didn't want to follow the rules at home. I still feel bad when she is all weepy... So, I told her to go to my bank and see what they could do. It is a credit union... but they don't do student loans. So, I called Sallie Mae and had the three of us on the phone. She gave all of her information, but failed to get approved. So, I gave in and put my name on it. I'm not sure if it is approved yet. She had to get a copy of her drivers license and social security card over to them. On the one hand, I want to help her! She is my daughter and she needs help. On the other hand, she chose to move out and be an adult so she needs to figure things out like an adult would... right?

Well.. I really need to talk to Kevin about all of this. I just hate to add any extra stress on him. I know he is stressed about all of this immigration stuff and some papers that we need and can't seem to get what they want. It's all frustrating stuff, but we will figure it out. I'm a glass half full kind of girl LOL Most of the time.. I try to look at the good.. Kevin is more of a glass half empty kind of a guy... And I love him for it.

Enough of that.. I'm off to bed... tomorrow morning we do the volunteer with the church. We are on the backpack station! So we will be hooking up some kids with some backpacks for school! I will be getting the kids up at around 5 am. It will be a really early start for them! Goodnight! 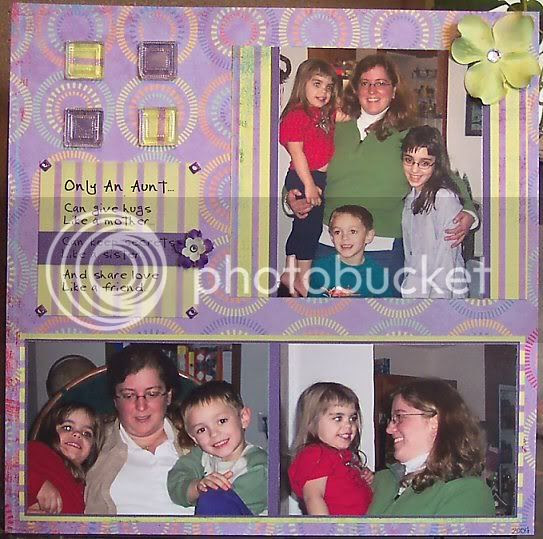 My sister with the kids years ago! Taylor looks like she is about 12 yrs old or so. She is 18 now. My sister has long hair here... Her hair is short now :)

well Susan... if you do find out how to say no... let me know! I think that's the hardest thing.

Just love the layout that you did. Very pretty colors!

Ah, yes, Susan -- that takes me back to the days when the kids in college only came to visit so they could do their laundry without having to pay laundromat fees. (smile) Still, it brought them home for a visit so...
I learned that saying "No" gets easier when the kids learn that you WILL say "No", and it's only hard between now and when they do learn. Which, of course, they never learn as long as we keep saying yes just to make them quit begging or nagging! :-D Cute page layout.