Yesterday was work like usual, but I left work around noon to get Michael to the Orthodontist to get his braces off!! Almost three years he has had those on and I couldn't be more excited that they are off. I think Kevin is more excited than anyone LOL Michael feels good about getting them off, but his gums are really bad so he is going to have to really concentrate on brushing and flossing with no braces so we can get his gums healthy again.

He goes back to the Orthodontist in a week to get his retainer. Then his regular dentist wants to see him two weeks after the braces come off so he can assess the gums and see if they are going down or if we need to do anything. Even with his gums all swollen, he looks so good :)  Really glad all that metal is gone!

I mailed off the photo album and a bunch of papers to Kevin yesterday. He is going to need that when he goes for his interview at the consulate. I'm trying to get everything together and to him so we don't have to worry about anything when the time comes. It takes two weeks for the mail to arrive there!!

My other bit of news that I've been sitting on for a bit is that I was asked to join the MelJen Design Team!! And I couldn't be more excited to be a part of that group. And I'm excited to get to know the other ladies and get started with those fantastic images!! I can't tell you how much I appreciate being asked to be a part of the team. 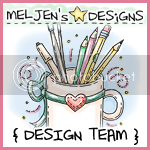 Now, I am on three MAGNIFICENT teams and I am thoroughly enjoying my time with each of them. I look forward to the months ahead of creating and learning so much from my team members!!

Taylor... I think I've talked to Taylor more in since I dropped her off at college last Friday, since she moved out of the house in May. The difference I would say is that she is truly on her own now. She was complaining about all of the freshman mandatory meetings and the curfew. LOL I have to laugh.. The main reason she moved out was because of her midnight curfew. Now, her curfew is 10:00 pm in the dorms. You just have to love how things come back around. She is tired of the mandatory meetings, fire drills.. she says to me last night... "Why can't they just leave me alone and let me do what I want to do!".  They have had meetings on Resume building, history of the school and Dahlonega, the fire drill LOL and of course the hall meetings. What she needs to do is embrace it... this will only happen once in her life and she needs to enjoy it and meet new people. I'm hoping that she will! And of course she has needs.. she needs her contacts.. which just came in the mail yesterday. She also needs Microsoft Office.. I have 2007 that she can use since I have taken it off of this computer and replaced it with 2012.  So that is that.

I did not go to Michael and Bailey's open house last night at school. It was a long day with the braces and everything. I will be contacting all of their teachers though. And that was my day... A good day. It has been a good week really!

I went and saw our VP/CIO to speak with him about some changes and just let him know I didn't want to get lost in the mix. Anyway.. I've been trying to get a promotion/raise for a year now. They are hiring my co-part at a higher pay rate/different title. So I told him it bothered me. I have been the one person that has stuck around and weathered through all of the changes and never lost a beat. I always go about and beyond and the Directors/VPs know that they can count on me whenever they need me.  So, I spoke with him on Thursday... took Taylor to school on Friday and when I came in on Monday I had a call from Human Resources. I just figured she needed me for something.. that is usually why they call me LOL It's good to know that even people in other departments know they can call me for things though.. Means they know they can count on me. To my surprise though it was not because she needed me, but to congratulate me and let me know that I had gotten that promotion and a bit of a raise. He took care of me right away.. I wish I had gone to him a year ago LOL  Hey.. at least its done now. So between that and the braces and getting the package mailed off to Kevin.. It has been a really good week. Now if we would just hear from Immigration it would be perfect :)

Well Susan great news about the DT team at Meljens. Everything works for the best. joann sassy raggedy

Congrats on the Design Team. Your work is amazing and I am so happy you are being recognized for it. I can say... "I knew her when..." LOL

That is funny about talking to Taylor more and her complaints. Sometimes it takes getting out in the real world to appreciate how cushy they have it at home.

COME ON IMMIGRATION!! WE WANT KEVIN HOME!! (hope that helped)

Congratulations on the Meljen's team, Susan! That's fantastic news. I can't wait to see all the beautiful and fun things you can do with her images (which I absolutely adore!) Hugs.

I know I’m probably late with this, but congratulations to Michael for finally getting his braces off! :) What else did the doctor say? Does he still have to wear retainers after? Retainers are usually recommended by orthodontists when a patient is done with braces. Usually, patients are advised to wear these during the first year after the braces have been removed to ensure the teeth stay aligned in their new positions.