Happy Tuesday everyone! Today I head back to work... Yuck! I have enjoyed the time off! Now it's time to get back to the daily grind. Today is the 2nd week of July at Tuesday Throwdown and time for another challenge. Here is my 2nd card as GDT. I hate this card LOL, but it is me playing with my Cameo to figure it out! This week they are sponsored by Meljen's Designs and the theme is Let's Have A Picnic.

Here is my card: 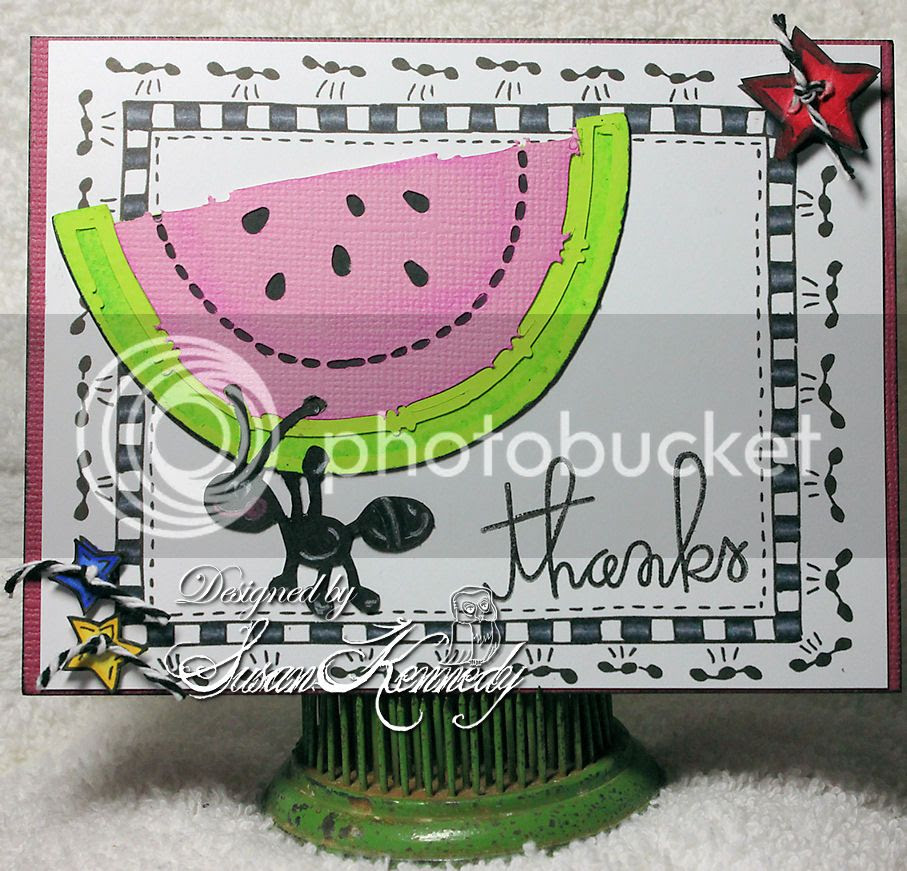 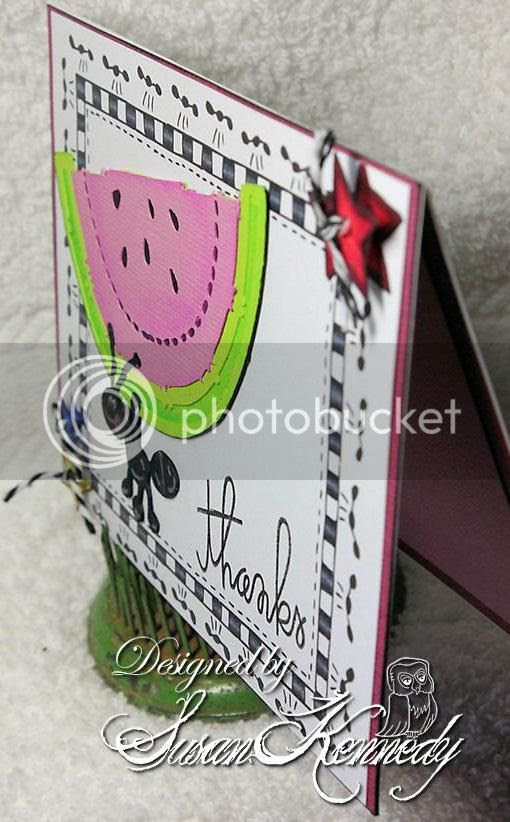 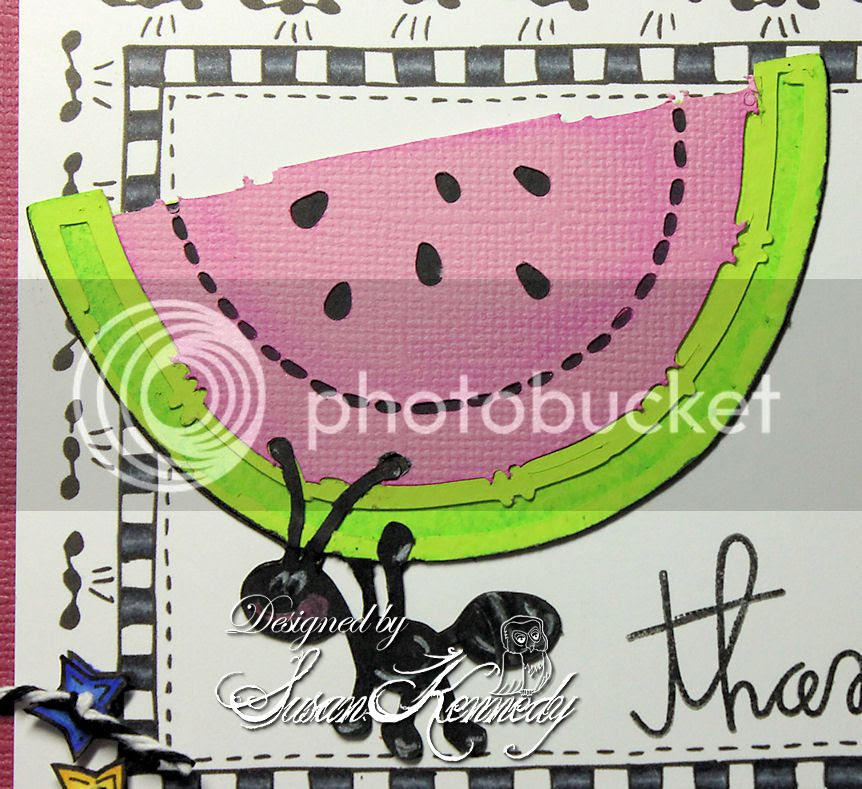 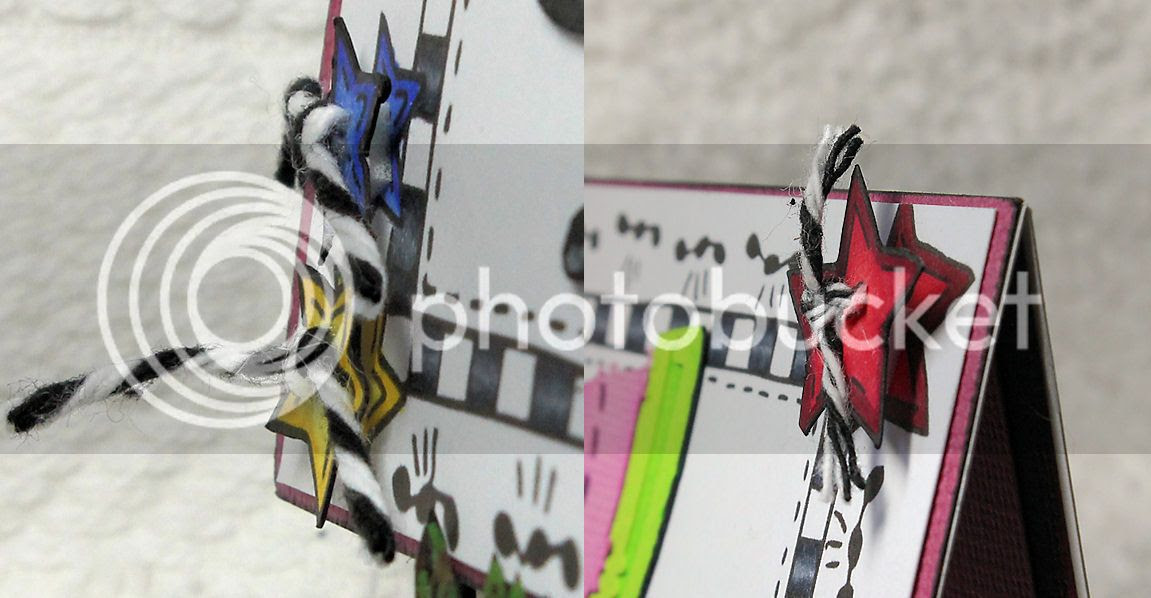 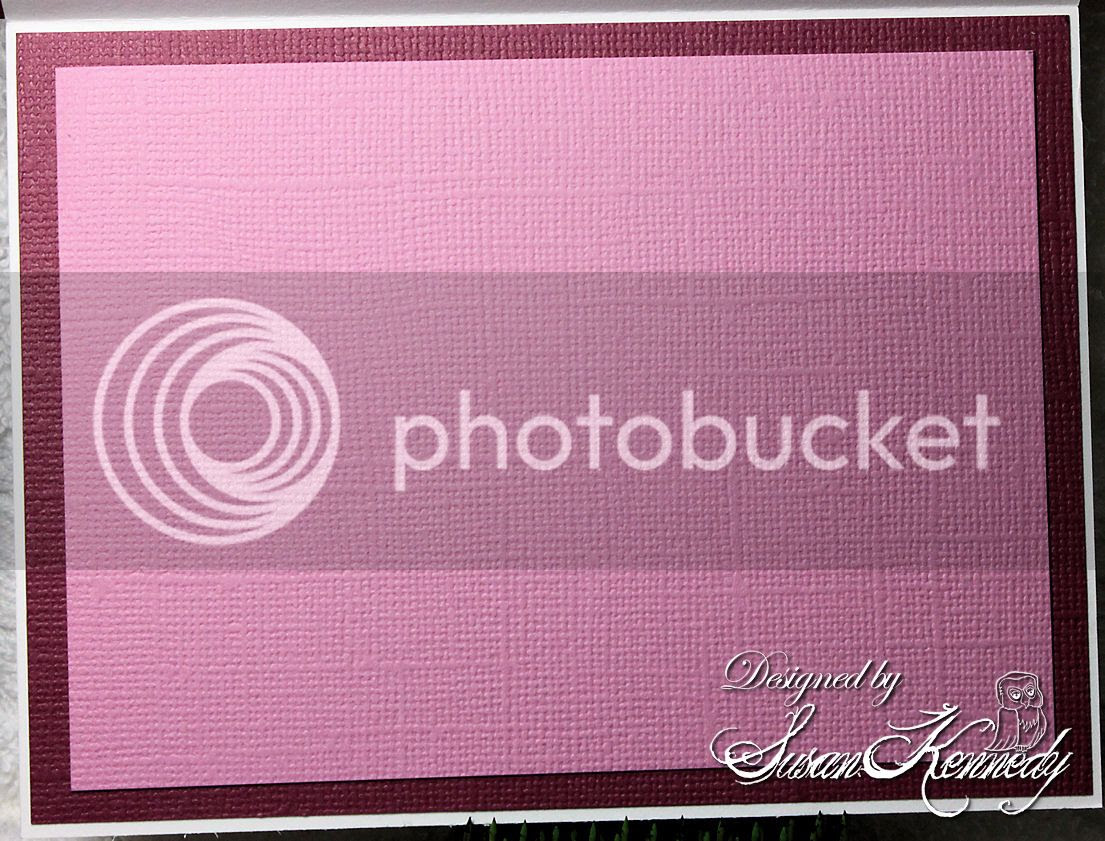 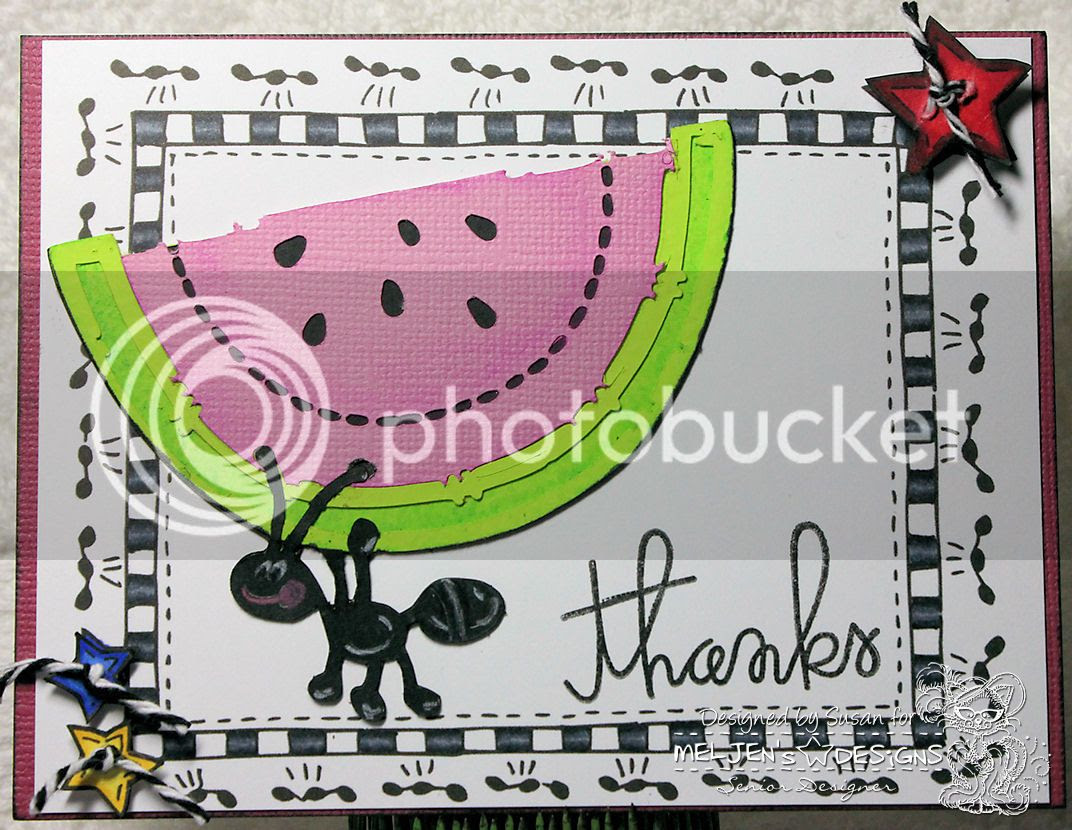 I used Marching Ant Frame and Watermelon Ant. I wanted to figure out how to cut around a digital image, so I used Watermelon Ant and figured out how to cut it on the Cameo. I pieced the different cardstock together. I added some chalk on the green and pink of the watermelon. I colored the star buttons and the black around the border with my Copic Markers. I popped the three buttons and added twine to them.  The Thanks is a Paper Smooches stamp to finish it off. 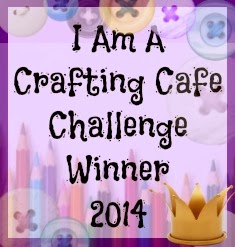 Gorgeous card, Susan ... that little ant is adorable! Thanks for sharing your beautiful project in our Let's Have A Picnic challenge at Tuesday Throwdown. Looking forward to seeing you again
Asha

This is so cute Susan. The little ant is really licking his lips for the yummy water melon. Love the little ant border.
Hugs
Desíre
{Doing Life – my personal blog}

So cute! Love the little ant. Thank you for joining us over at the Scribble and Scrap Challenge. Good luck.
xx

Love your card Susan, The way you cut out the watermelon and ant are so cute!! Very fun :) So glad you are joining us this month at TT!

Gorgeous Design...just perfect for our challenge over at Suzy Bee's, I do hope you will join us again next week for another fun challenge..
Hugs
Suzy B (Owner)
XX

This is too adorable, great looking watermelon too. Thanks for sharing with us at Come and Get It challenge this week. Barb DT

Darling! Loving the border you added and the image of the ant carrying the watermelon- a feast to be had! Loving seeing your GDT work at Tuesday Throwdown!

ahhhh soooo cute! That's one thing that I have yet to learn how to do... use my cameo to cut my digis...

Fab card, Susan! Great design and I love the watermelon! That is one strong ant!!
Thank you for joining us at the Chocolate, Coffee and Cards Challenge. Jane xx

It's really too bad that you hate this card, Susan, because I absolutely adore it! That watermelon looks good enough to eat. Fab coloring on the ant and I love all the ants on the border. Such a clever design. :-D

So very cute! I love all the little ants marching around the framework. PRECIOUS!
Lynn

Hee Hee, it's lovely Susan! I love the watermelon & the cue little ants!
Thanks for playing in our Felleing Fruity Challenge at The Crafting cafe this time!
Good Luck
Hugs
Dawn xx

What's not to love? This is adorable.

love the ant carrying the watermelon. great job. thank you for sharing with us at SBC

What a cute card! I also need to figure out how to cut my digis with my Portrait. Thanks for joining us at My Sheri Crafts!

Hey Susan, when you figure out the cameo, then you can give me lessons, but I think you did an adorable card, love the image and the ants border too.
Thanks for sharing with us at Come and Get It.
Cindy

This is such a fun card. So cute! So glad to have you on board with our TT team this month.

Hi Susan another perfectly awesome card lol. What a cute and fun theme. I wish I could use my portrait more I can't be bothered trying to figure it all out so it gathers dust lol. Jacqui DT Sister Act

Thanks for sharing your super creation for Suzy Bee's Bloomin' challenge 36 - hope to see you again soon, Hazel, DT - thank you also for entering this for my Patterned Paper July challenge. x

What an adorable card. The ant border is just perfect but my favorite are those stars that pop out

Thanks for sharing with My Sheri Crafts

This is very cute, thanks so much for playing along in our anything goes challenge this week at Catch The Bug.

Beautiful card , so cute! - thanks for joining us at Creative Fingers, good luck!

This card is adoreable, oh my its so cute with the ant and the watermelon.
Thanks for joining us over at HIMCR for the challenge.
Lisa
Ljcreation@blogpsot.com
HIMCR DT

Susan,this is gorgeous. I love it. Thanks for joining us this week for our Bug challenge.
Karal DT for QKR Stampede

What a great project, very cute!! Thanks so much for joining us for our July Anything Goes Challenge at Catch the Bug! Don’t forget to check The Bug Blog for our 4th Annual Christmas In July Week long event!

Fantastic card and I am in awe at how many challenges this card meets!! Way to go - you are amazing!!

Yummm watermelon ,, Ewwww ants. Darling card and love the style. Thanks for joining us at Paper Makeup for our ATG challenge.

I love all the details you added to your card! It's so cute and perfect for summer! Thank you so much for sharing your creativity with this week's Paper Smooches SPARKS Challenge!

Cute card! Love all the depth you've added too. Thank you for joining the Crafting From The Heart Challenge, hope to see you again very soon.

((((Susan))) Had a typo in the first post so deleted it. Please don't hate your card. It is cute and I love the Ants! I too am new to the Cameo, my only problem is currently it doesn't have a permanent home and is not hooked up. Will get back to learning once I reorganize a little more. Thanks for stopping by The Paper Nest Dolls! Melanie, DT

Cute card! I like the dimensional stars. Thanks for joining us at SBC. Cindy --DT

Fab project , thank you for joining us over at the Crafting Musketeers this month , Fran (DT) xx

What a fun, colorful card! I love the ant theme! Thanks for joining us at My Sheri Crafts.

such a fab card, the textured paper you have used for the watermelon looks great x Thanks for joining us over at The Crafting Cafe for this months challenge. I hope we see you again soon x

Lovely fun card and, here's something I didn't think I'd ever say, what a cute ant :-) Thanks for joining us at the Crafting Cafe!