Back From A Long Hiatus*

Good morning everyone!!  And it has been a long time since I've posted! A lot has been going on :)  I haven't posted since March. I was getting ready for surgery.

On April 21st, I had Bariatric Bypass Surgery; I had the RNY procedure. I chose the RNY for various reasons: one being that sugar is a real down fall for me, another being the amount of weight that I needed to lose and another being that I was borderline Diabetic. I had a wonderful surgeon, Dr. Jean-Pierre, who works for WellStar (which is where I work). That whole office, Comprehensive Bariatric Surgery, is just wonderful!! My highest weight was 295 pounds in October of 2014. With a lot of hard work and support I was able to get down to 277 pounds as of surgery. The surgery went really well and I was in the hospital for two nights after. I was up and walking the night of surgery, I didn't have a lot of issues with gas and not a whole lot of pain. My sister stayed with me while I was in the hospital and encouraged me to get moving. She was fantastic!

Once I returned home from the hospital is when the hard work began. For three weeks I was on a liquid diet and that was the hardest thing through all of this LOL!  An all liquid diet is horrible! I was so tired of drinking my meals by the end of the three weeks. After the first three weeks I was able to move on to soft/mushy foods. It was eating things that you could cut with a plastic fork. That was much better! And I was able to experiment with some things. I was just happy to not be drinking everything!

Another three weeks later I was able to begin eating regular food again. Although, I am unable to eat a lot of sugar, so I have to be really careful with that. I still can't have raw vegetable, although I'm hoping I will be able to have that soon. I am not suppose to eat anything bread for another 7 months or so. And I REALLY miss bread! And my portion sizes are very small. I can eat about 1/4 cup at a meal. I eat every three hours and I focus on protein. I have to get in at least 60 grams of protein each day, so I focus on getting that first. I take a Flintstone Complete vitamin twice a day and my calcium three times a day. I was on medication for high blood pressure before the surgery, but I am off of that. I was off of that medication a few days after surgery.

I have worked my daily exercise up to at least 60 minutes a day for at least 4 days a week.When we are kayaking, I am doing 6 days a week, but we are waiting on wiring up the trailer so we can get back to that. Exercise has gotten so much easier as the weight has come off. I've been doing a lot of reading when I go to bed and while I walk on the treadmill. I also do lifting every other day. I've managed to keep my muscle mass so far, which is a good thing! I have been feeling really good for the most part. I have gotten sick only twice. There are times when I don't chew well enough and that hurts.. so I try to really pay attention to that. All in all, it has been a great experience so far and I feel great!

It was really hard to get back into a routine and I still think that is a work in progress. I struggle with not weighing myself every single day. I am not losing as fast as I would like to, but that is because I am lifting. There is so much focus on the numbers that it is hard to not focus on that -- the numbers on the scale! As of Tuesday evening, I am down to 237 pounds. I can't remember the last time I weighed that. And 200 is in sight! I'm closer to 200 pounds now instead of 300. That makes me really happy! And my family has been so amazingly supportive.. especially my wonderful husband!!

I completely lost my creative anything until just about a week ago. I'm really glad to be crafting again!! So, I decided it was time to get back into creating and posting! So, this is my first post, post surgery LOL!

I am posting a card that I made for Faery Ink. This was using The Bubble Fairy Queen.  Here are some photos: 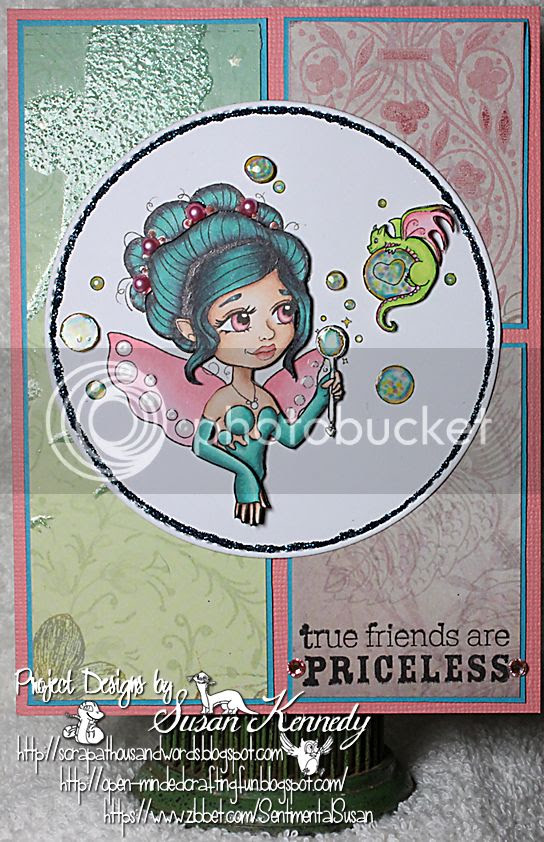 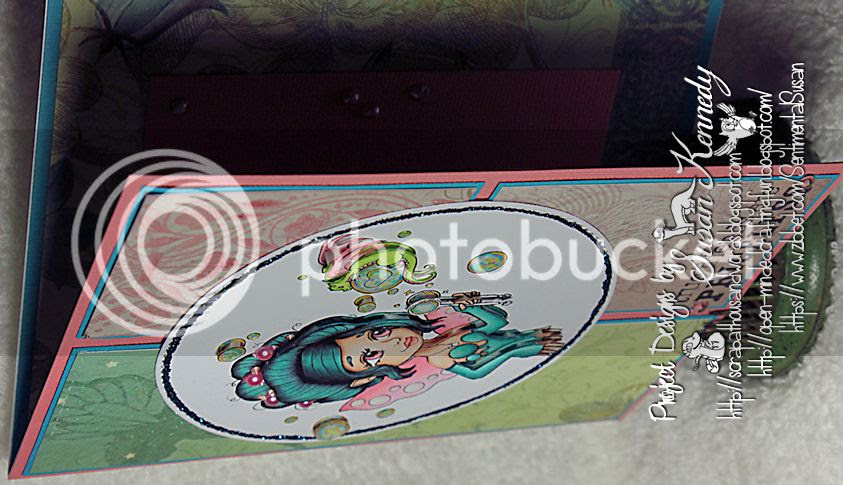 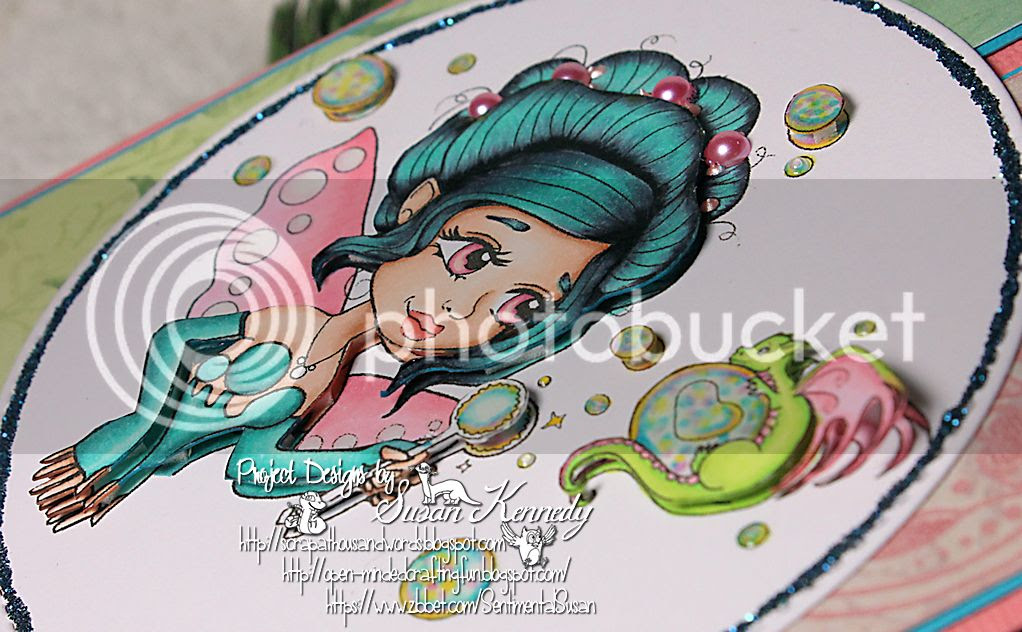 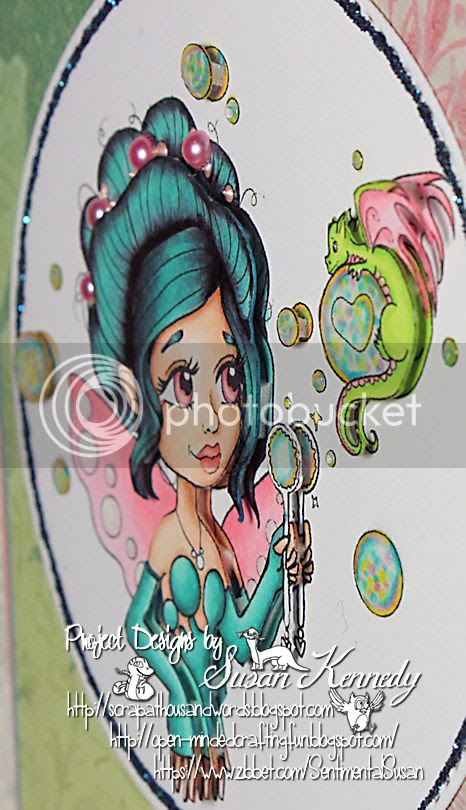 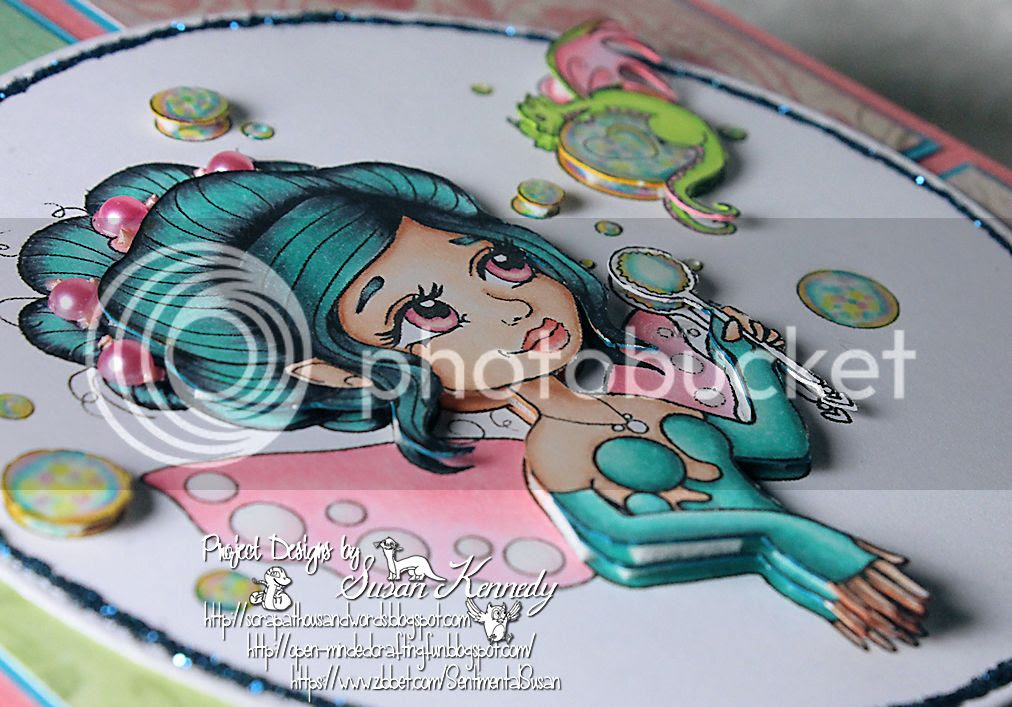 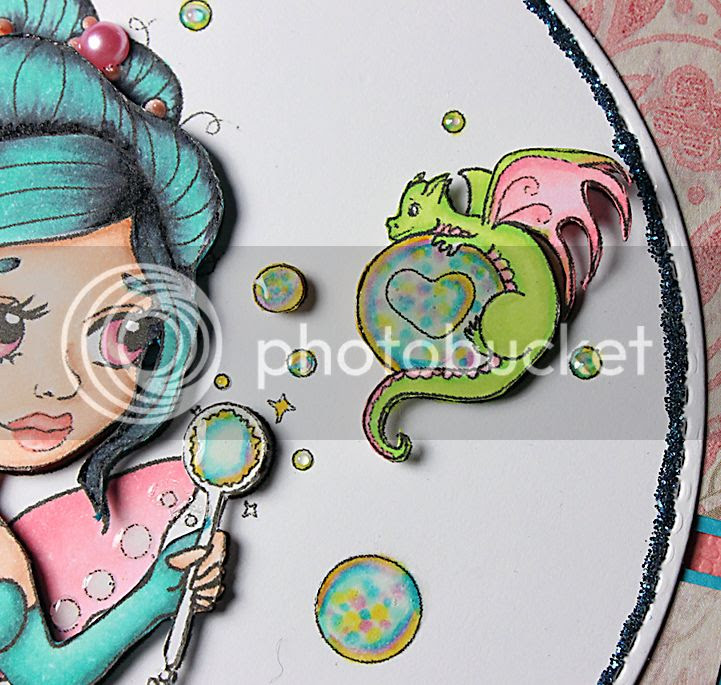 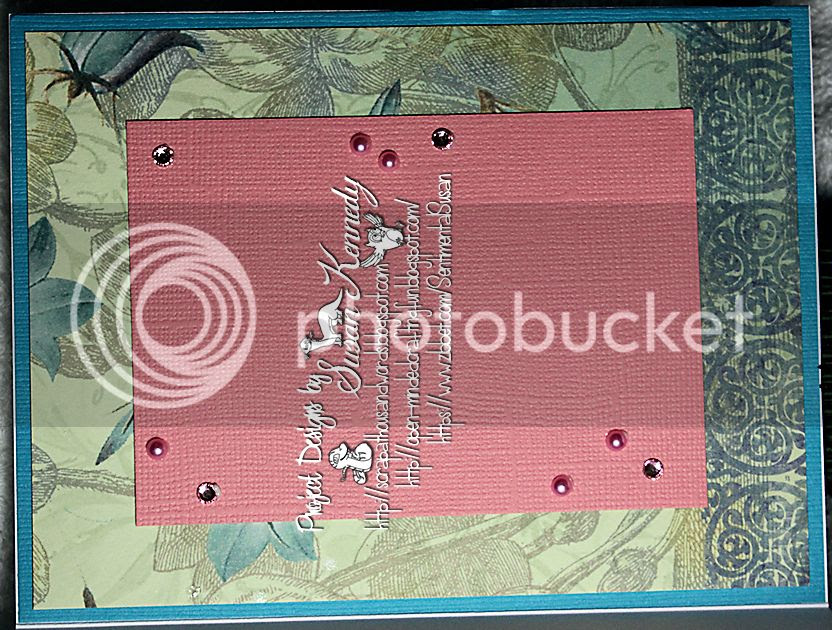 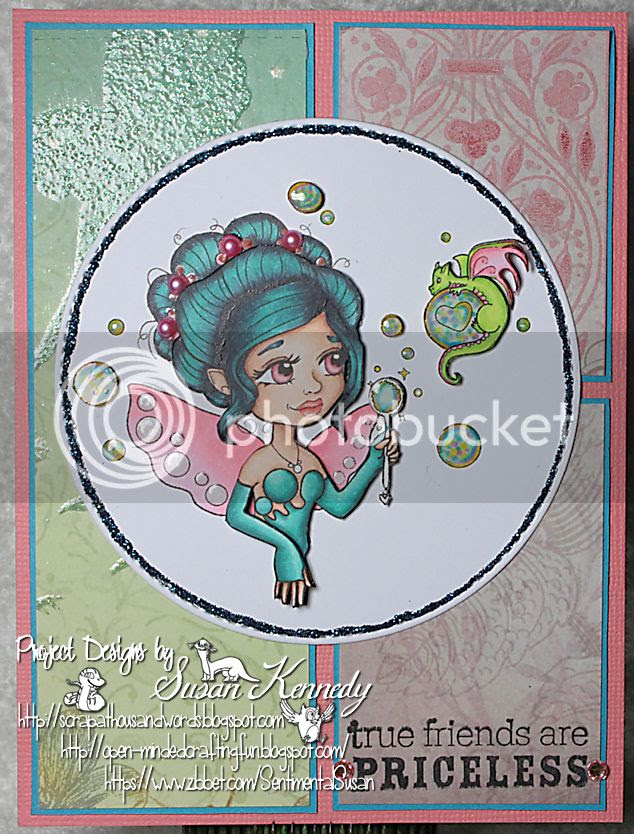 I used Copic markers to color this amazing image of Amanda's. The paper is a stack that I bought at Michaels. I can't remember which stack it was. I added some Diamond Glaze on her wings and the bubbles. I added some pearls to her hair and paint dots. There is glitter around the circle. There are pearls and gems on the inside of the card. I also layered the image a bit. Hopefully you can see some of that in the photos. 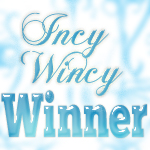 It's so good to see you posting again, Susan! Thanks for sharing your adventure with us and congrats on the weight loss. I love the card! Great paper choices and delightful image. Now, time for a DT hat -- Thank you for playing along in our "Anything Goes" challenge at Aud Sentiments this fortnight. Good luck and come play again soon.
NanaConnie DT

Wow your card is gorgeous I love the image and the design of your card. I am sorry that you have been so ill. Thank you for joining us this month at Not Just Cards . Hugs Jackie DT

What a journey you have been on.. and still going strong Susan...congratulations...take one day at a time. Love your gorgeous card, the image and dimension is brilliant and your colouring is gorgeous. Love the pearls in her hair...take care.

Sooo great that you are back Susan! Tough journey you've had and still have, but I'm glad to read that you are happy with it! And your card is fabulous! I love the colours!

All My Love Crafts said...

This card is just so darling! I love how you colored the image and the sentiment fits perfectly! Beautiful work! Thank you for joining us at Creative Craft Cottage and hope to see you again soon! :) ~Annie

great attention to the smallest detail. Thanks for joining us for our 'Anything Goes' challenge #36.
Alicia (Art by Miran DT)
MaxiBelle Studio

Gorgeous card Susan. Thank you for playing along with our Challenge at CCC Digi Creations. We would love to see you again. Anet DT

Beautiful card Susan. Thank you for playing along with our Challenge at Creative Craft Cottage. We would love to see you again … Anet DTx

Wow! What an incredible journey, Susan - such focus and determination; well done on your weight loss so far.

Thanx for sharing your super design with us at The Alphabet Challenge and good luck.

Susan gorgeous card
Thanks for join us at
{Digistamps4Joy DT Member}

I loved reading your story of this procedure. More than anything I am glad you took the steps to get healthy again. I can see how hard you are working for yourself and those who care about you. Keep up the good work Susan. Your creativity is back. Your card and coloring is awesome. I am so proud of you....Hugs, joann

What a gorgeous card, love your card design and your image.
Thanks for sharing it with us and hope to see you again in our next challenge as well,
Hugs
Willeke
DT Through The Craft Room Door

Fab card, Susan! Love the image, your coloring and design! :^)
Congrats on doing so well after your surgery! It sounds like you are doing everything just like the doctor suggested, in order to lose the weight and keep it off! You will feel so much better physically and emotionally! I am really impressed! Way to go! :^)
Hugs, Penny

Gorgeous card! I love the little dragon - so sweet! Pretty colours too. Thank you for sharing it with us at Stamping Sensations.

Gorgeous card. Lovely colouring and design. Thank you for joining us at Crafting with Friends this week. Hope to see you back ere again soon. Judy DT

Gorgeous creation Susan, so glad to have you back. Well done on your postive approach and keep up the great work xx

Love all the colors you've chosen and all the dimension. Thanks for sharing it with us for the Sparkle N Sprinkle Creative Challenge.

Welcome back, its lovely to meet you. Wow this card is amazing I love it. Well done you. Thank you for joining us at Incy Wincy this week. Hugs Traci DT xx

Susan - This card is really gorgeous. I love the layers and the colors. Congrats too on feeling so much better after your surgery, and getting back into your crafty groove. Thanks for sharing with us at Sparkle N Sprinkle's Anything Goes Creative Challenge.

Susan this is brilliant! Such a fabulous job with the colors! Thanks so much for sharing with us at Craft Your Passion#271! Good luck!

Wow, your coloring and layout are just stunning. I totally love it. Thanks so much for sharing with us at Your Scrapbook Place Challenge this month. We can't wait to see more of your work in future challenges. Cheers, Holley

A great card - thanks for joining us at the Sisters of Craft Challenge.

What a gorgeous card. I love Amandas images I must colour some more up. i love how you have layered to raise the image. The sparkles are a nice touch too. Well done.
Thank you for joining us over at Lil' patch of crafty friends. Goodluck and hope to see you again soon.
Erica (DT)
www.ericraftblog.blogspot.com

Wow! Congratulations on your weight loss! I wish you continues success on your journey! So glad your feeling up to creating cards again because your card it gorgeous! I LOVE how you colored the image and I love even more that you layered her in the 3D style! Absolutely beautiful! Love it! Thank you for playing along in the Word Art Wednesday Challenge! Have a blessed day!

A beautiful card Susan and well done on your weight loss. Thank you for joining us at the Crafts Galore Encore Use a stamped or digital image on your project Challenge. We hope you can join us again next month. Jo x

Such a beautiful card and gorgeous colouring :-D
I am so pleased you are doing well with your weight. I guess it's a scary operation to have but you are doing marvelously...... GO GIRL !!! :-D Just imagine what a gorgeous little fairy waif you are going to be :-D :-D

This is so cute! Love the image and how you popped things. thanks for playing along with Crafting With Friends

What a gorgeous card! Love the picture and the design. Thanks for playing along with us this month at Craftyhazelnut's Patterned Paper Challenge.
Diana DT

Just had to pop by and leave you some love and support Susan. So glad to see you back and feeling the creative bug again, you have been missed. Looking forward to seeing all you wonderful creations.
Samantha (AngelicBadGirl)
xxxxx

Glad your surgery went well.
Lovely card. Thank you for joining the challenge at Creative Fingers, Digi Stamps 4 Joy, Digitally Sweet and Not Just cards.. Hope to see you again next time.