On September 11th we received our initial approval from the immigration center in Vermont. It took about six months to get through there. From there, the paperwork had to move on to the State Department I believe it is. There they issue a National Visa Center number. We have been waiting a couple of weeks for that and we FINALLY have it!!! I couldn't be more excited... there is truly hope that Kevin will be home for the holidays. I was almost resigned to the fact that we would be spending Christmas without him. Last night, the attorney sent an email with the number attached and told us to get Kevin's medical exam done right away. When we spoke to the medical facility that would be doing his exam, there are only a handful of approved physicians, they said it would be about a ten day wait for an appointment. I called last night to set up the appointment for him and they set it up for this Thursday!!! .. Two more days from now!! I couldn't be more excited! We are on our way now :)

Last night, Michael was in his room tossing something and most of the time missing it with a nice big CRASH! I had been on him for about 20 minutes to STOP!! And the boy just ignores what I say!! And then.. low and behold there is a very LOUD knock on the door. I knew right away what that meant... the police were at my door. Have you ever had them knock at your door.. oh my gosh!! They knock REALLY loud!! LOL So, I answered the door and sure enough it was a female officer. I put T-Bone in his crate and had her come in. She said that the neighbors downstairs had called complaining about the noise. I knew why she was there and took her back to Michael's room and let her talk to him directly. I figured that would have a much better effect on him. He knew he was in trouble.. and he answered her questions and he put away the item he was tossing and told her he would stop. We have had a lot of trouble with the neighbors downstairs. They are always complaining about noise and the majority of the time we are not loud. I know that the dog gets loud sometimes, but I take his toy and have him settle down. I do my best to keep things at a decent level of noise. The man downstairs is not very nice, kind of an angry guy. He won't make eye contact, he curses out on the back patio, he smokes with no regard to where his smoke is going.. which is right upstairs and into my window... Yuck!! Oh well.. he is who he is and he will have to answer for his own one day. I will continue to be respectful to them. I had just spoken to the wife last week letting her know I was doing the best I could. The officer came in very gruff, but I stayed calm and respectful and she in turn came down to a more approachable level. She knew that we had had trouble with the neighbors before. She left with a just do your best and was on her way. The kids were quiet after that! Go figure!! I really don't know what I'm going to do with Michael. I may end up having to send him to his father if he doesn't start listening to me. I hate really hate the thought of that, but I'm at a loss as to what to do.

Also last night..  my dryer died! Well.. I believe it must have died this weekend LOL I can't get the clothes all the way dry! I will have to see what I have once I get paid on Thursday... guess I'll be breaking down and buying a dryer! It IS a really old dryer and it was only a matter of time, but it is always something, isn't it!!??

Even with all of that nonsense, the noise, the dryer and my kid not listening to me!! .. that is another story on its own.... I am so happy and it was a good night.

Yesterday was my first day with the girl that will be my partner in crime at work :)  It was a good day and she is really nice. I think we will get along well. The day seemed to go well. My desk sure piled up with work though! Maybe I will go through it today and see if I can pass some of it off to her. That is a good idea!

I hope you all have a wonderful day/evening!! 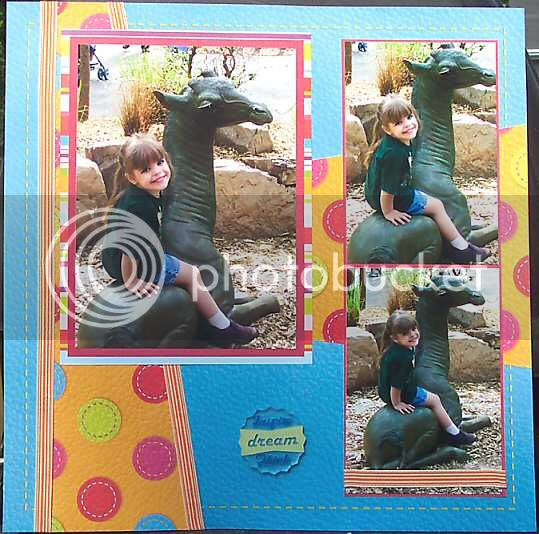 Little Bailey sitting on on a bronze giraffe at the zoo LOL She's was so cute!! I can't say that about her now.. she's too big.. now she is just beautiful :) Hard to believe how quickly they grow up!!

Fantastic news for Kevin. Really happy for you!

And yes... there always seems to be something that breaks.... I guess that's how cies make their money lol

This is beautiful. Everything works so well together. So glad things are looking up. Hugs Desíre {Doing Life - my personal blog}

Fabulous news for you and Kevin - things seem to be moving along for you both. Hugs, Karon.