Good afternoon everyone!! I was trying to get this post up this morning, but it just didn't work out. So I'm going to get it up now. I hope you all had a fabulous week! This was the LONGEST week! I thought it would never end! It just kept going on and on and on LOL!!  I'm just glad it is Friday and I'm home. I did get a lot accomplished this week.. so that is something good! It always feels good to have a productive week at work.  And tonight I don't have to go running anyone anywhere! Bailey is riding the bus home, Michael doesn't have to work and no one is going anywhere until tomorrow! Tomorrow, Bailey is going to hang out with her boyfriend all day for the cul-de-sac Halloween get together. That will last from the afternoon into the evening! And Michael works tomorrow. I really don't plan to do much of anything but craft! It should be a good, relaxing weekend :D

Here is my creation for today.. another Autumn card: 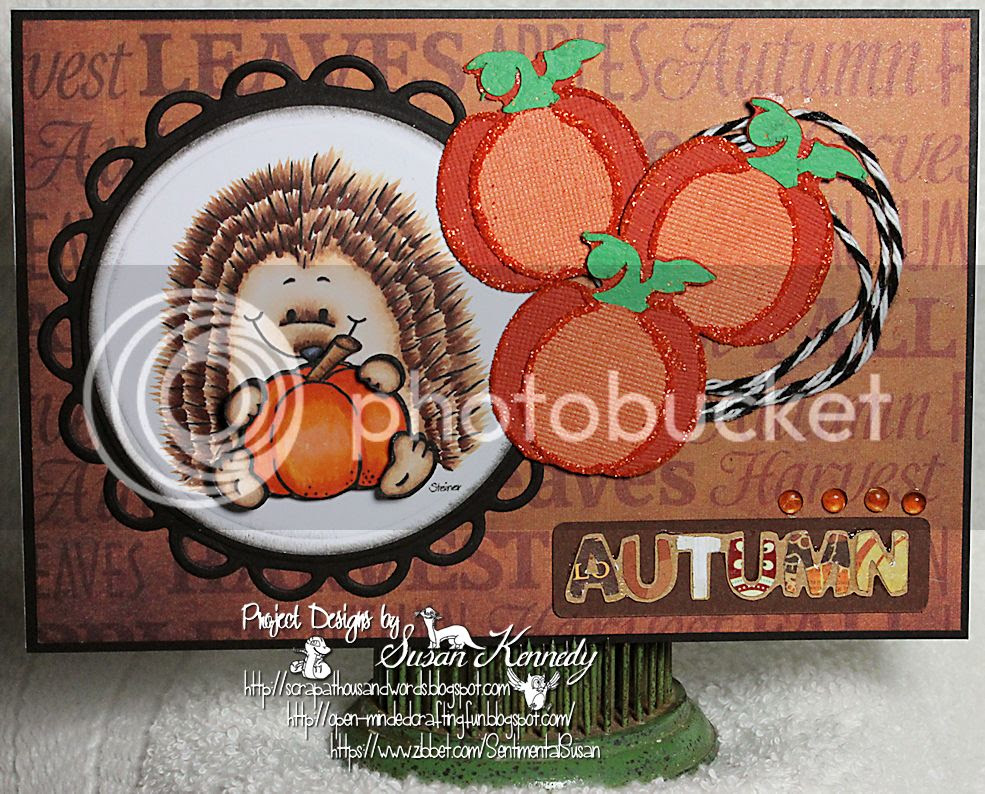 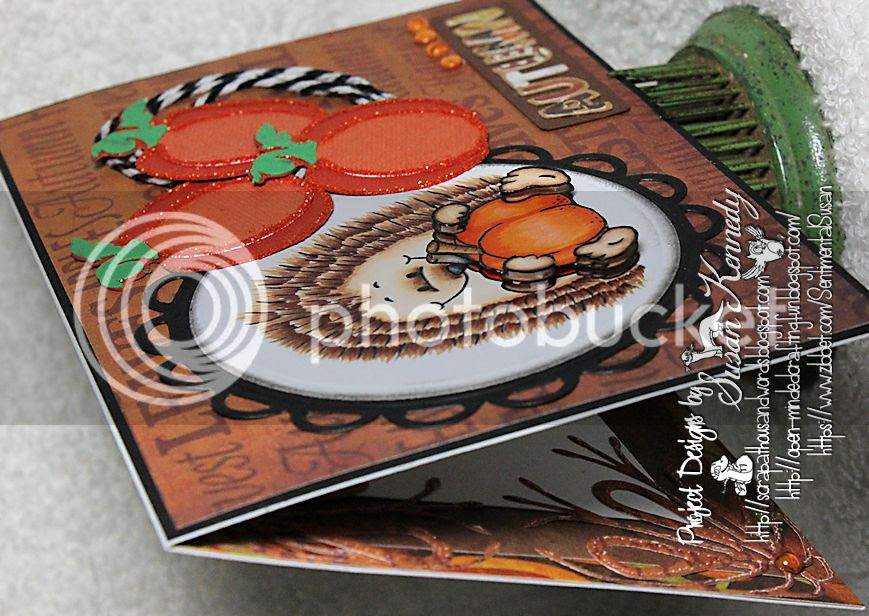 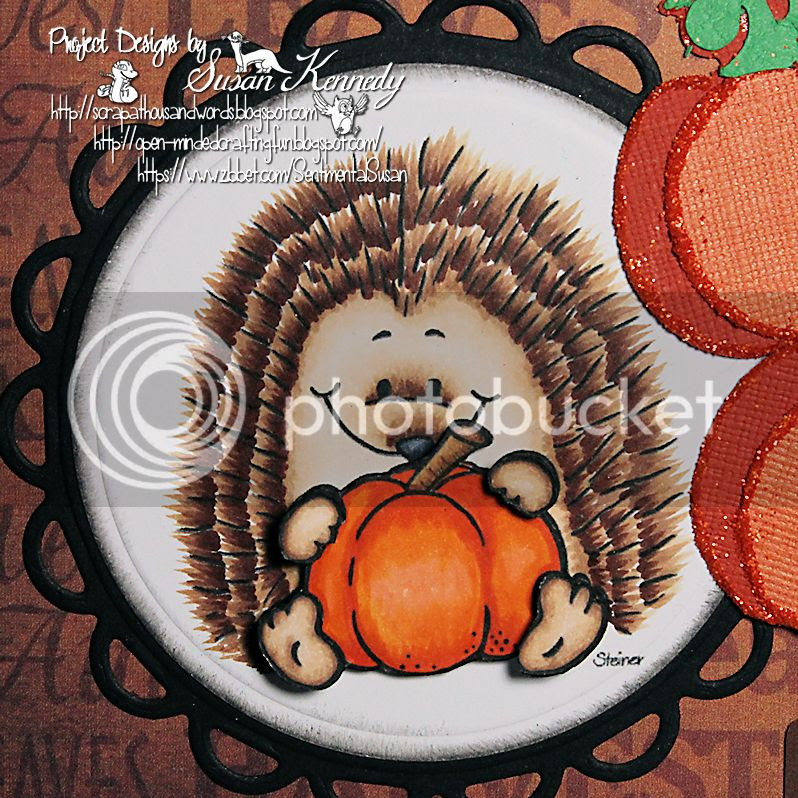 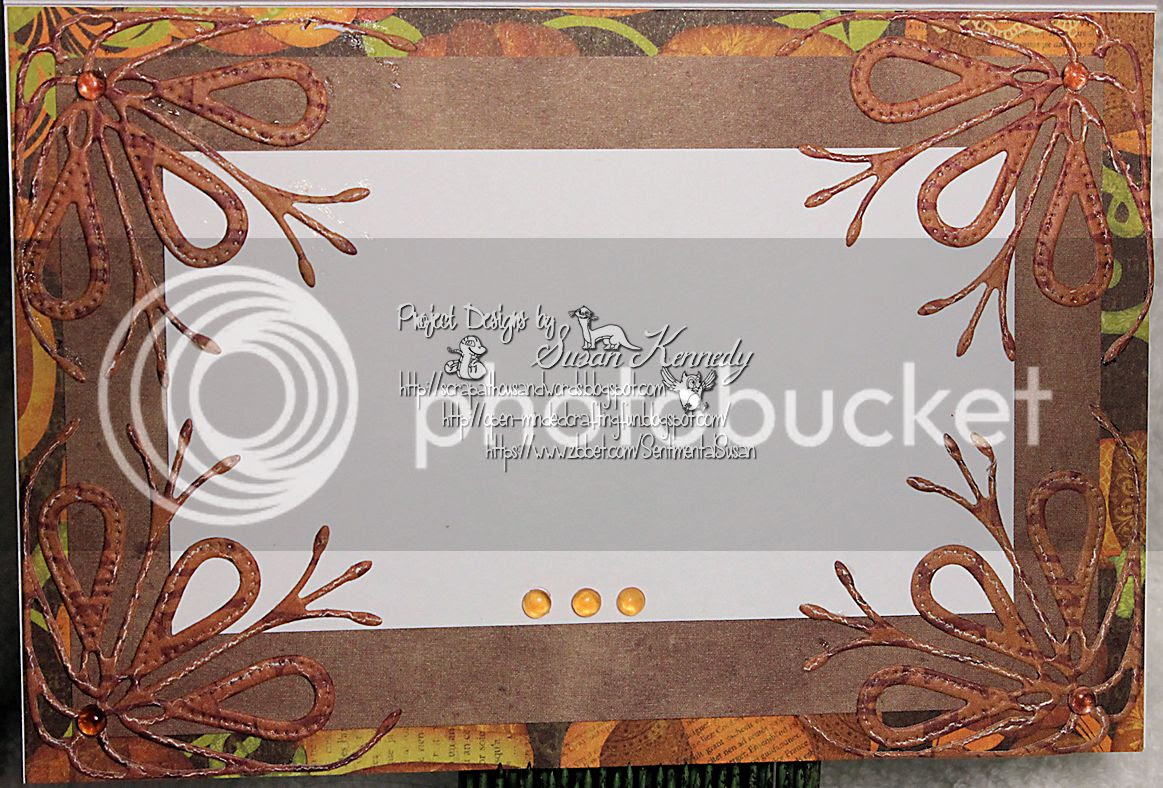 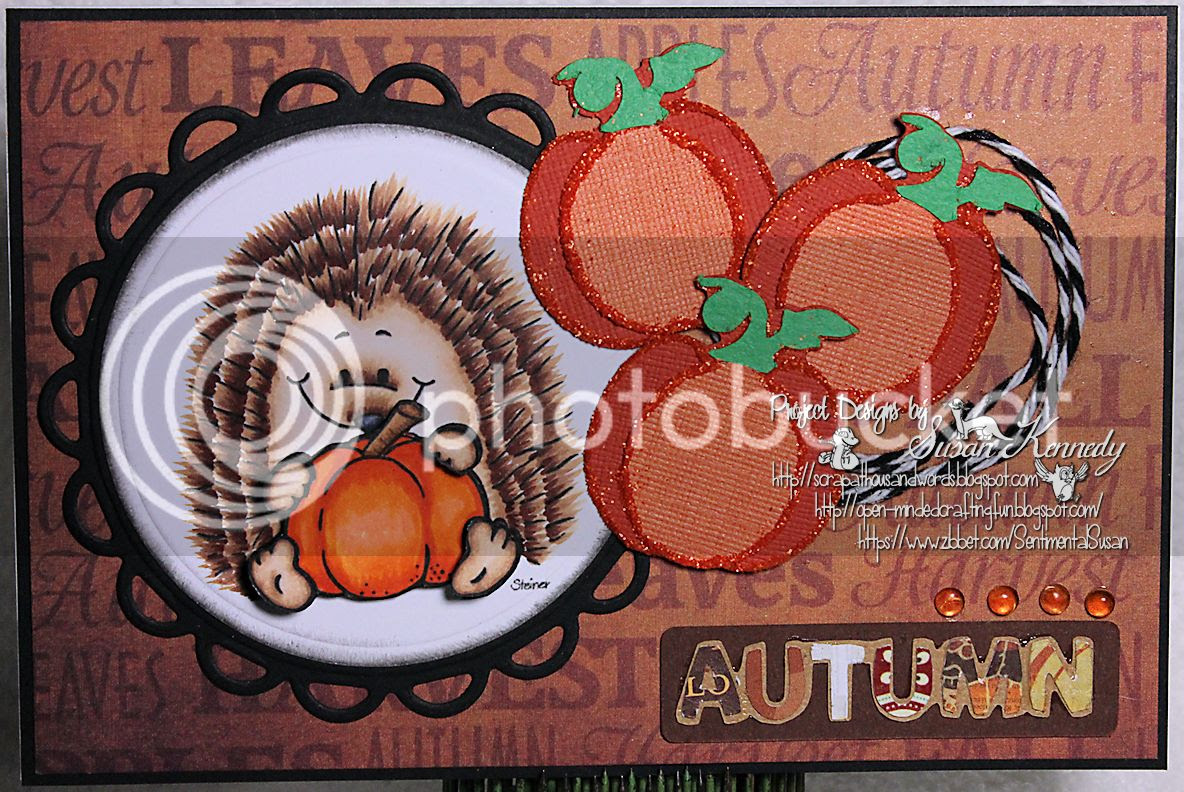 For this one I have used Hedgehog Pumpkin from Gerda Steiner. I think he is just ADORABLE!!! I colored him with my Copic Markers. I've done a bit of layering as well. I used a Spellbinders die to cut around him, which I inked with black. Then added another Spellbinders cut behind it in black. The pumpkins and Autumn were cut using the Silhouette Cameo. I've added some twine and dew drops. On the inside I used a Memory Box corner die and added some of those dew drops. The pumpkins have some orange glitter added to them as well. I've used all scraps with this. I've done pretty well using my scraps so far this season!!

This is fabulous Susan and yes, the hedgehog is too cute! Your coloring is AWESOME! Wishing you a wonderful weekend. I'm expecting somewhere between 100-150 trick or treaters tomorrow evening but other than that ... I too will be crafting! YAY~
Thanks so much for joining us at The Sisterhood’s ‘FALL’ challenge and please come back again soon!
Darlene
one of the 'Sistahs'
The Sisterhood of Crafters
DAR’S CRAFTY CREATIONS

I was just linking a card over at two different challenge blogs and saw your GSD card for this month and had to come take a closer peek! Every aspect of your card is awesome and that little hedgehog is so adorable!

Have a great Hallowe'en!

Such an adorable hedgehog, layout and colors. Thank you so much for taking time to post your very creative art with us this week at Word Art Wednesday in our 207th AG challenge! Blessings, Carole

What a cute card Susan. Love the hedgehog. Thanks for sharing with us at Come and Get It.
Cindy DT

Oh....this is SO DARLING, Susan. I love the hedgehog. He's just adorbale, and the paper torn pumpkins are so sweet. Such a super creative card with so many great elements. Thanks so much for taking the time to share your talents wtih us again this week. I always feel SO blessed to have you play along. Have a blessed week, and thanks so much for all your encouraging comments.
God bless you!
Karen
Word Art Wednesday

Too cute. Thanks for linking up over at 2 Creative Chicks

So cute!
Thanks for linking up over at 2 Creative Chicks.
Janis, DT Member
Pause Dream Enjoy
PDE Linky Party

Super card Susan. Love the Hedgehog and how you have coloured it! Thanks for sharing with us at Come and Get It and we hope you will join us again soon. Meighan DT

This is a fabulous card, such an adorable image.
Thank you for joining us at Di's Digi Designs.
I have candy on my blog if you would like to take a look - http://craftingwithcotnob.blogspot.co.uk/
Pauline
x

This hedgehog is a cutie, lovely coloring and colors to create a genuine feeling of fall...

Really cute card and your colouring looks amazing. Thank you for sharing your work with all of us at Crafty Boots Challenges.

Such a cute project! Lovely! Thank you for joining us at
MOO-MANIA & MORE -CHALLENGE
oxo
Susi

Adorable, I love how you coloured this little guy. Thank you for joining us for Tuesday Morning Sketches,

This is so cute! I love the dimension added by all the layers of your image!
Thanks for playing along this week at Tuesday Morning Sketches!!
Debbie (TMS DT)
Debbie's Dash of This and That

Beautiful card Susan. Thank you for playing along with our Challenge at Penny's Paper-Crafty. We would love to see you again ... Anet DTx

Beautiful! I love hedge hogs and this one is just as cute as can be! Love those pumpkins too! Thanks for joining us at 4 Crafty Chicks this week!
Tina- 4CC DT

Such a cute card! Thank you for joining us at Crafty Gals Corner! Jeanie, DT

What a cute image and card. Thank you for sharing with us at The Sisterhood of Crafters.

Such a lovely fall card Susan, I love all the little details. Just letting you know that you are one of the featured artists at Anything goes, Just keep on creating for the October link-up :)

A lovely card!
Thank you soo much for taking part in our "use orange” challenge over at Come and Get it.
Hope to see you again in our next challenge as well…

(DT Come and Get It)

Fabulously cute. Love those pumpkins and that Autumn sentiment. Thanks for joining in with Crafty Boots Challenges this time.