Oh Happy Wednesday everyone! Yesterday we had a strep test for Bailey.. it was negative. And get this!  The doctor says to me... I'm calling in some antibiotics for her. We will send this off to be tested and if it is negative in a couple of days I will call and let you know to stop the antibiotics. And all I can think is... WHAT??  That doesn't even make any sense! We are all becoming immune to these antibiotics, but you want her to take them for a couple of days just in case? How about we just wait and I'll start them if she has a positive test! I was so shocked!

Then it was Michael's turn to get his 2nd booster. So, we finished with that and I took him to school. Him and I had a discussion about his school work. His drama teacher has gone to the counselor to complain about him not getting his work done in that class... he is not getting his lines memorized. They have suggested that the counselor, his drama teacher, myself and HIS BOSS come in to meet. Michael has told her that he isn't getting the work for her class done because of his job.  What?!?  Bring his boss in!! You have GOT to be kidding me! Then they will just stop giving him hours. No.. I don't think that is going to work. And my first response to all of this was just that.. and that I believe he is getting more life experience out of holding a job then he is in acting class. He doesn't like his drama teacher at all.

After I spoke to Kevin though, he made a valid point. Michael doesn't work every day.. he was working about every other day. So honestly, there is no excuse for him not getting his work done other than he doesn't like his teacher and he is lazy. That is how it goes for him though. He hates school and he puts no effort in at all. It is frustrating. Michael called me and told me I needed to come pick him up from the bus right around the corner because it had broken down. When I got him, I tole him that I had been thinking about our discussion this morning and that I thought he needed to get his priorities straightened out and work on his homework on his days off. So he says to me.. so you are taking her side? LOL! I said no.. I'm not taking anyone's side. I just think that you need to be able to do both; School is important too! It has ALWAYS been a struggle with Michael in school. He has yet to pass the first math in High School. I get so frustrated with him! Alright.. enough of all of that!

Here is my Christmas creation for today: 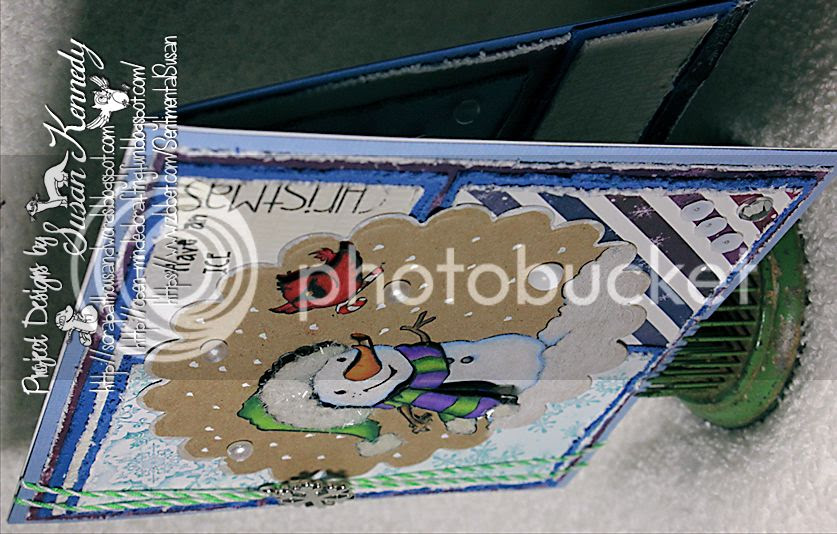 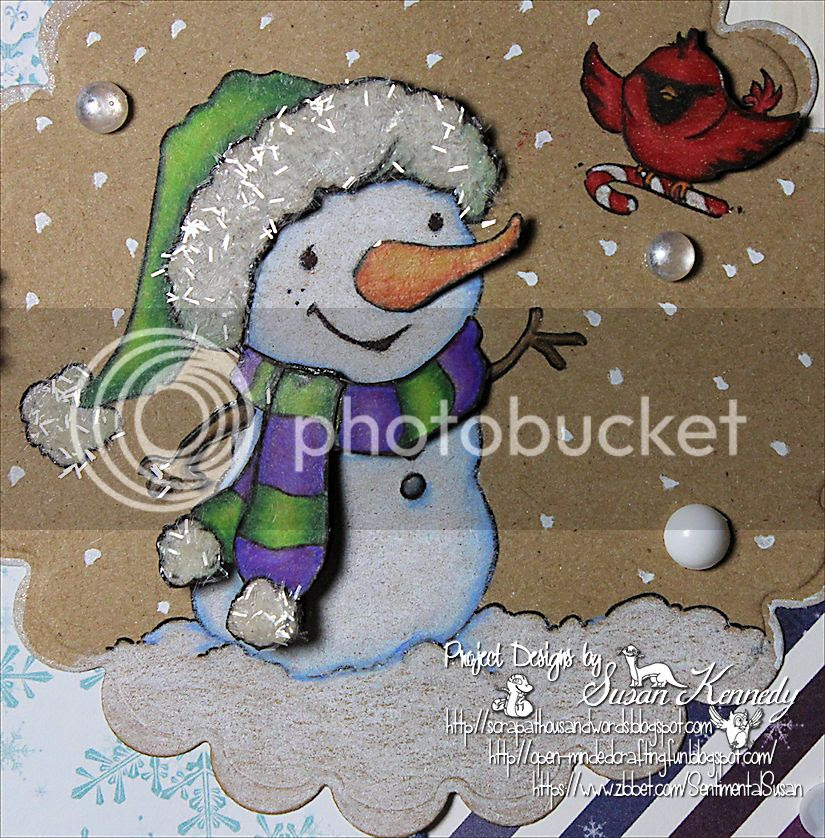 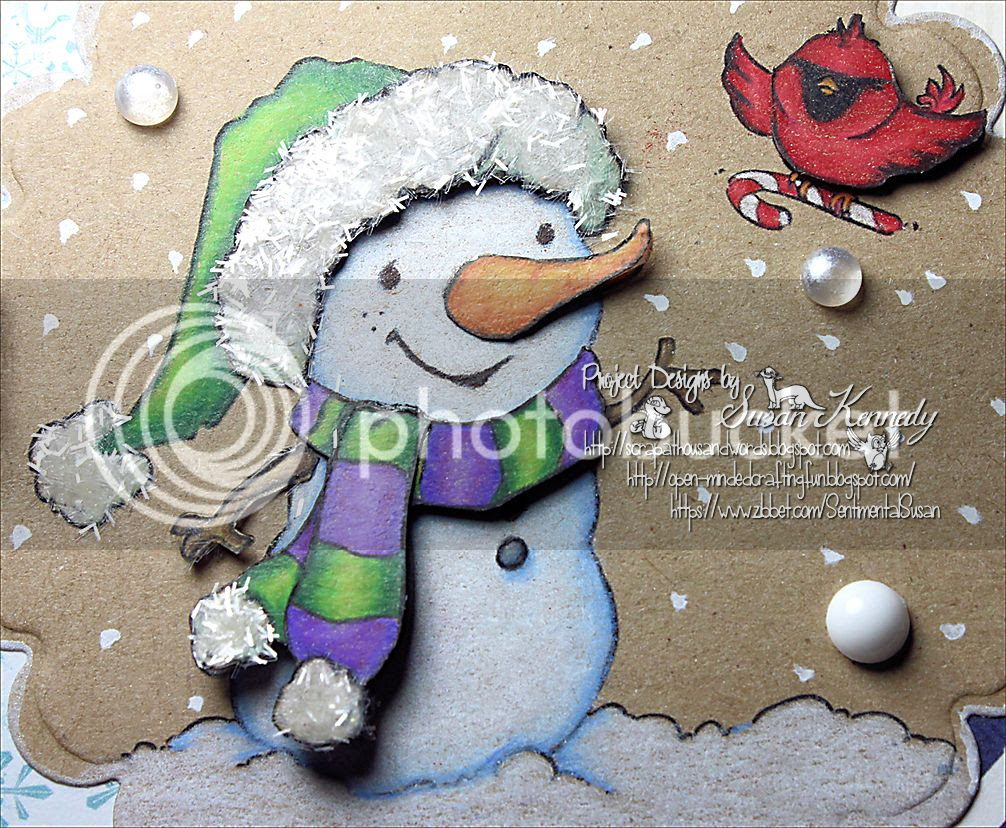 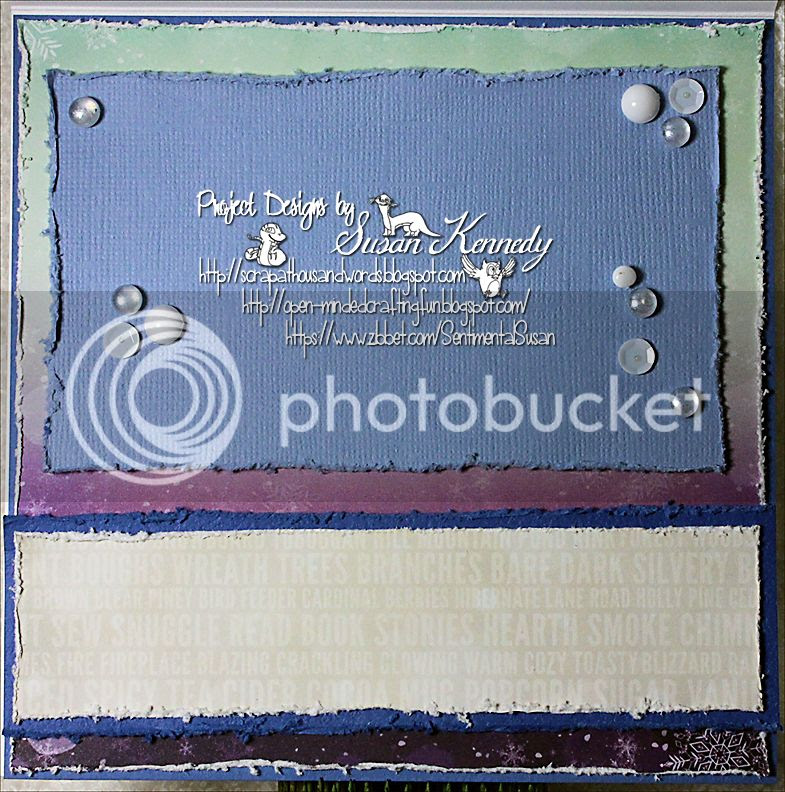 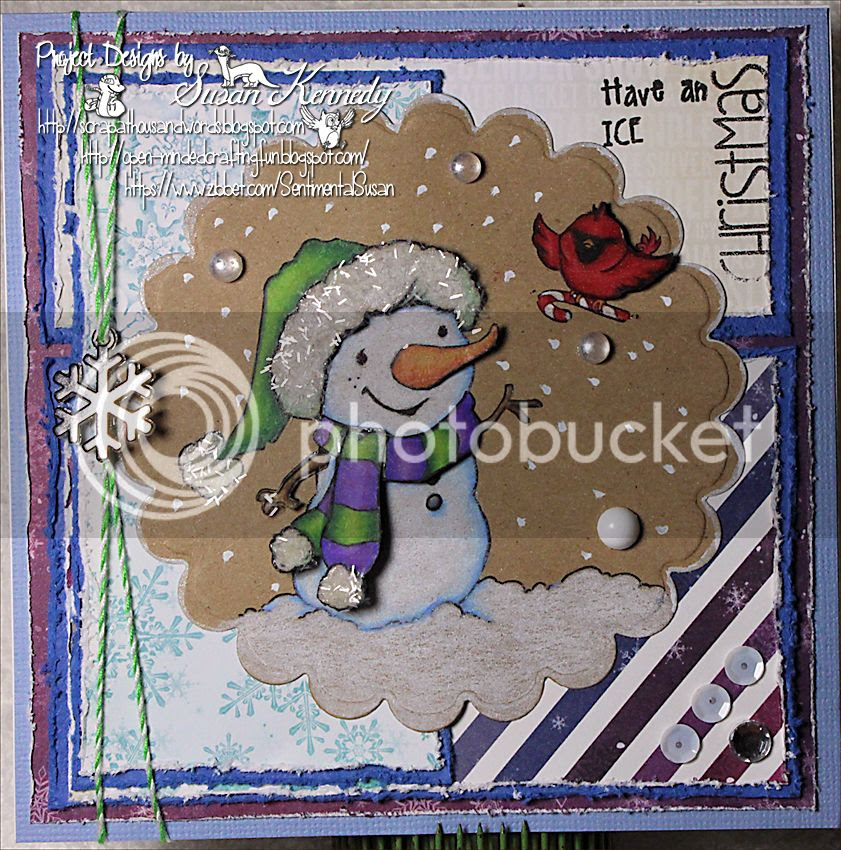 This image is Candy Cane for Snowman which is from From The Heart Stamps. I colored this image with my Prismacolor pencils and used a Spellbinders die to cut around it. I did a bit of layering on the image. I added some snow around the image. I used White Wink of Stella for the snow and the white around the edge of the die. I added some dew drops around the image and a gem and white sequins in the bottom corner. All of the papers were distressed. The blue papers are all scraps and the patterned papers are from Bo Bunny - Altitude pad. I used two different stamps to create the sentiment. I added some green and white twine on the side with a snowflake charm. I also added a bit of glitter to the hat and the balls of the scarf.

Sweet Christmas Card ! The different layers looking great and your coloring too.

Thanks for joining our FREE Stamp of the Month August Challenge @ From the Heart Stamps !!

Morning Susan what a gorgeous Christmas card I love the image as its so cute and your design is wonderful.

This is adorable. Love those snowflakes. Hope all goes well in your family. Enjoy them now. All too soon the birdies fly from the nest.

TOOOOO cute! I just love this and that sentiment is adorable!

Such an adorable card... great sparkle on the hat... so sorry about what your going through... hope all gets better soon... crafting helps... thanks for joining us at Happy Little Stampers Christmas Challenge... xx

Adorable snowman ... I just love how happy he is! :) Thanks for playing along at Happy Little Stampers.

What a great Christmas card. I love the wintery scene you have created. Thanks for joining in at Crafty Boots Challenges this time.

Gorgeous Christmas card, fab image and I love the 'fur' trim. Thank you for sharing your work with all of us at Crafty Boots Challenges.

What a sweet happy snowman! Love the sparkle on his hat! Thanks for joining our challenge at Happy Little Stampers.

A fabulous card, such a fun snowman image.
Thank you for joining us at Craftyhazelnut's Patterned Paper Challenge this month.
Pauline
x

what a sweet christmas card. thanks for sharing it with us at TTCRD and good luck, Theresa DT xx

Love all of your finishing touches!! super sweet Christmas card! Thanks for sharing with us at Word Art Wednesday this week!

Beautiful and glimmery Christmas card. It's never to late for starting on them. Thanks for joining us at Sweet Stampin' this week :)

Super cute Christmas card. Thanks for joining us at Sweet Stampin'
Cass xx

Very cute snowman card! Thanks for joining us at Crafty Time this month.

What a beautiful card. Thanks for linking up over at 2 Creative Chicks

lovely cute snowman, thanks for joining us at Christmas Card Challenge. Gail DT

Cute, cute, CUTE! It's wonderful done on kraft and I adore all the sparkle. :-D

Gorgeous card, Susan. I love it ALL!! LOL Thank you for sharing with us at Craft your Passion challenge blog this week.

Such a cute snowman and perfect snowflakes on the pretty paper too. Thanks for sharing at CCAYR and Good Luck!! Sarah :0)

Such a cute image - I have it too! Thanks for entering Crimbo Crackers - hope to see you again soon!

Stunning~~~ Love the layered scarf and your beautiful coloring on kraft!! Thanks for joining us at FTH for the SOTM challenge.

Fantastic card, Wonderful image!! just love this holiday card
Thanks for joining us at Hiding in my Craft Room
Cheers Jennie DTM
Jenscrapstoo

Beautiful Christmas card, love the paper and the cute image.
Hope everything gets better soon!!
Thank you for your entry at Scrapping4funChallenges.
Hugs
Rachelle DT
http://scrapping4funchallenges.blogspot.com

Super cute and happy Christmas card!! The snowman is adorable and I love the design. Thanks for joining us at Scrapping4fun
Tina dt