This is a day to remember those lost in the attacks against America. This is a day to pray for the families that lost their family members and friends. A day to remember and pray for those service men and women that lost their lives trying to save others and those that serve today to keep our country safe and free. Remember those civil servants, your police, firemen, first responders; they risk their lives every day for us. Remember the priest who lost his life trying to help those in need and to pray with them. Think of those today, those priests, those pastors that strive for us to have a healthy relationship with God and for us to remember how important Jesus Christ is to us and for us not to forget that.

September 11th, 2001 - It affected the whole of the United States.. it affected the whole of the world. Kevin and I have spoken about this fateful day. Even he was frozen to the television watching in disbelief at what had just happened; not moving the entire day. I remember where I was and what I was doing as I know many of you can remember as well. I was at home with Bailey; she had just been born July 24th and I was home on maternity leave with her. The television was on the morning news and they were talking about a plane that had crashed into one of the towers. I sat there and watched it thinking that it was just a small plane that had accidentally hit the tower. And then you watched on live television as the second plane hit the other tower. I knew right away that this was no accident; as did everyone else watching. And then the plane into the Pentagon and the plane in the field that went down with our brothers and sisters fighting for their lives and fighting to save others so that this plane wouldn't cause any additional losses. I pray today for all those affected.

My sister lived in New York at the time and she worked downtown. We couldn't reach her, none of the phone lines would work, the cell phones wouldn't go through. It was terrible not to be able to reach her after the towers went down. What a devastating loss for the world, for our nation. Such a senseless act of violence. I will never understand the hatred that people have for our nation and for the American people. I will never understand how people can twist a religious belief into such hatred. Jesus Christ paid for our sins by giving his own life. There is nothing but a true and unconditional love there. God is love, forgiveness. Not hatred...

Remember... remember those lost, those affected, those that serve. Never forget! 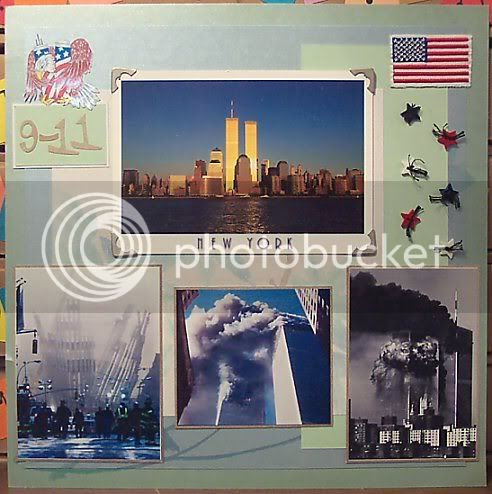 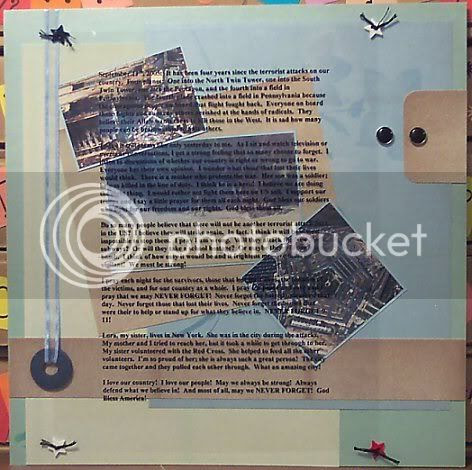 yes it was so senseless... great layout!