Year of the Monkey

Hi everyone! And a very happy Saturday evening :)  Today has been a day full of working on Etsy and running around with my hubby. We did a bit of shopping today at Goodwill. I love finding items there to help with altering and such! I found quite a bit to work with! It was a great visit there! Then from there we went to computer store. Hubby had dropped off Bailey's laptop for them to work on. He wanted to make sure it would be finished by Monday. Then it was off to the Dollar Store to look around. We picked up a few things there and then I headed to Michael's to pick up a few things. I did Etsy promoting before we left and then I did more when I got home. I have spent a ton of time promoting, but I think it is helping, so I will stick with it. I might have to cut down a bit hahaha! but I'll continue at it though!  Later on in the afternoon I had to take Michael to work and then Kevin and I stopped to pick up Chinese for dinner for us. I came home and did a bit more Etsy promotion and then cleaned up my desk. It has been a mess since I worked on my last couple of cards.

Bailey has been out this weekend at a Church Camp. She will be coming home tomorrow. And then it is back to work and school for everyone! Taylor has her other eye surgery on Tuesday. Bailey has Goalie practice on Tuesday, Wednesday and Thursday early morning. Then she has practice after school each day as well.

Okay... onto my card. I had a friend at work place a custom order with me for two Chinese New Year cards. One was for her best friend and the other was for her bet friends little girl. So, I wanted to make a nice, more elegant card for her friend, which I will post today. Then for the other I wanted to make something that was more for a child. I will try to post that tomorrow.

Here is the first card: 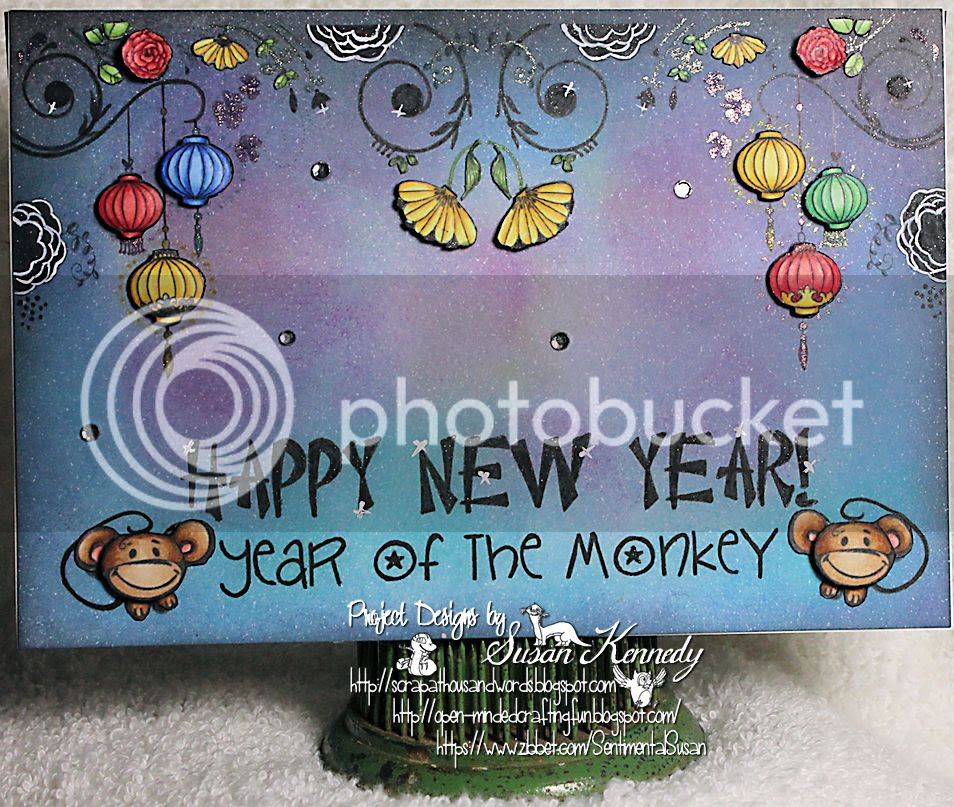 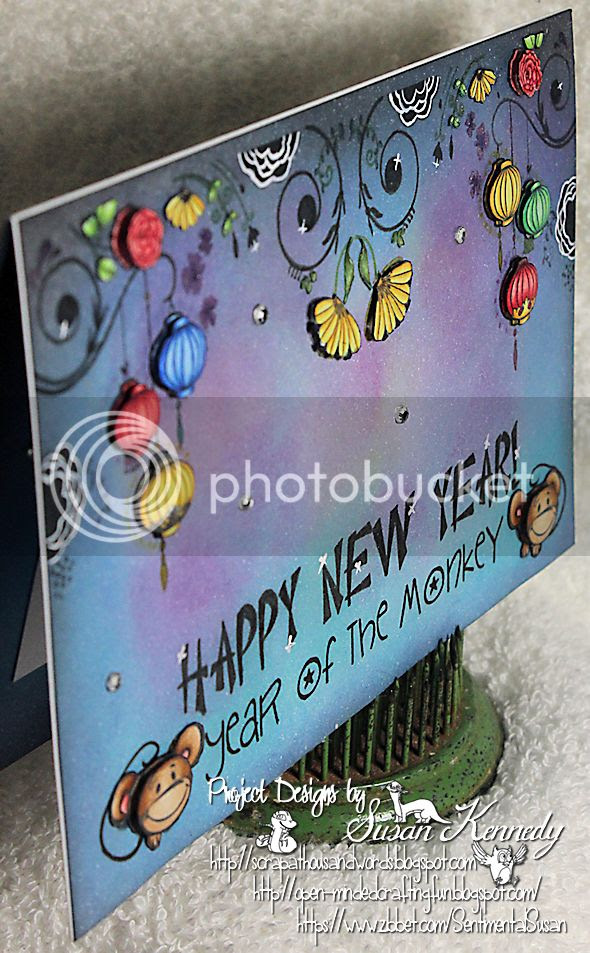 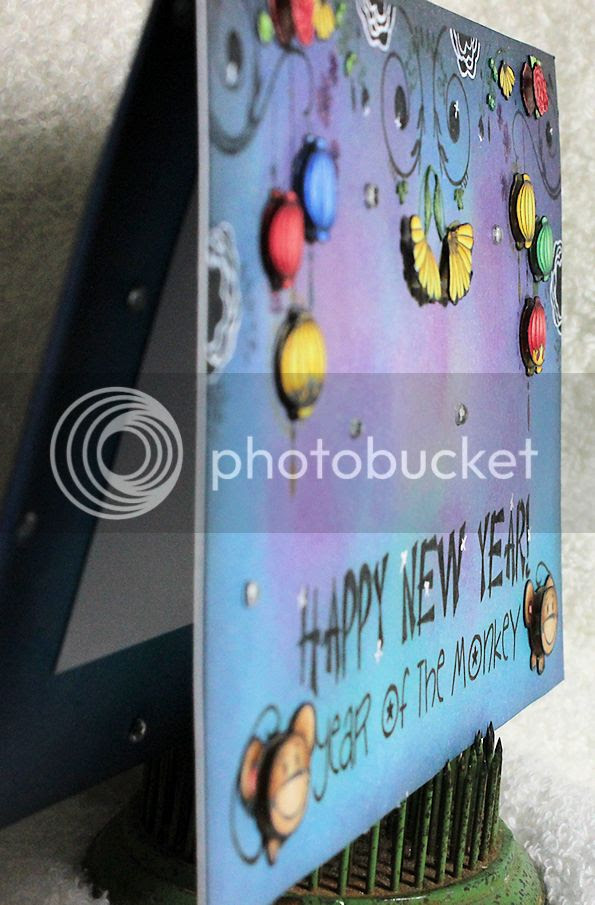 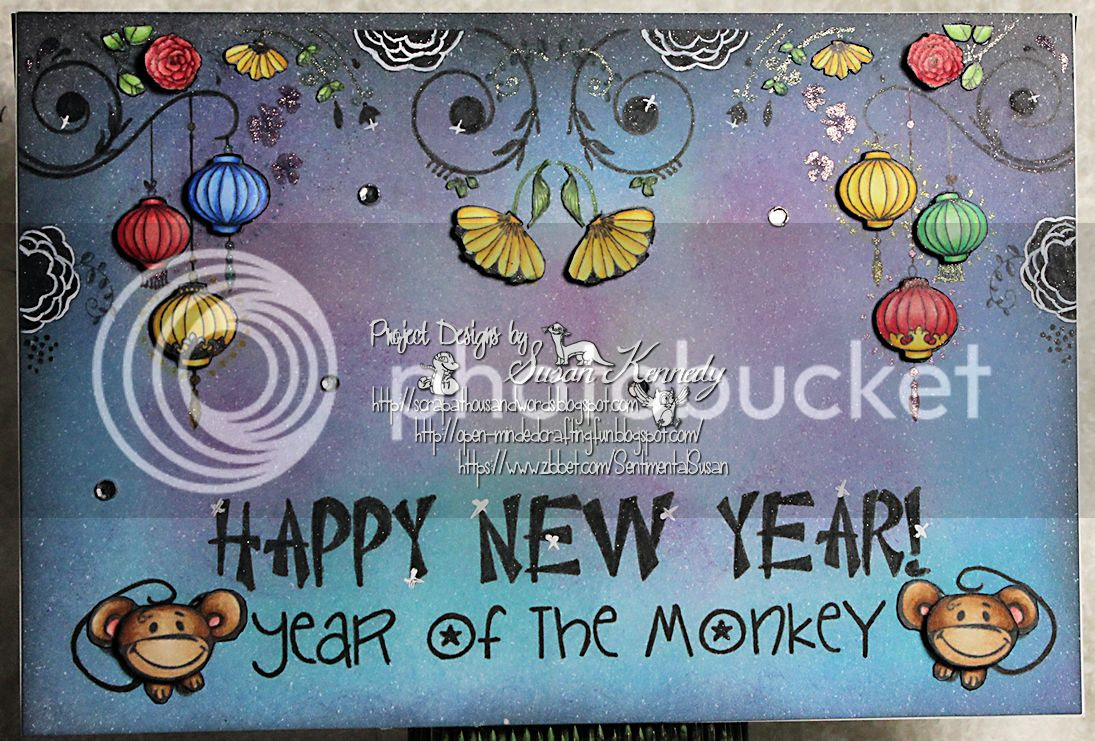 So, I wanted to try to go for something a bit elegant and adult. I inked the background with distress ink on the inside and the outside. I used a lot of glitter markers along the black and opaque white markers for the white and the sparkles. I used Copic Markers to color the lanterns and the flowers. I di pop the flowers, the leaves, the flowers to give the card a bit of dimension. The little monkeys I also popped for dimension. I added a few gems/rhinestones to add a bit more sparkle to it. I also added some gems/rhinestones to the inside as well. I was able to use scraps on both of these cards that I made for her too! And this was created for her best friend. I really hope she likes it!

This is absolutely gorgeous Susan! I really loving all the details. I'm the year of the monkey so this card is very extra special to see. Thanks for sharing.

So beautiful and amazing card.
Thank you for joining us at Retarte#69
Maria Pilar (Stampartpapel DT)

Beautiful cards, Susan! Your friend will be very happy!

Very beautiful! I love it!!

Gorgeous card, the color and the details are great. You succeeded in making an elegant card with a little bit of fun for the year of the monkey. Thanks for joining us at Crafty Friends.

Wow! That background looks awesome. And I really like the dimension added to your card with the popped up lanterns. Great job!

Wow, this is really spectacular..your design and use of color is breathtaking!

Beautiful card. Thanks for linking up over at 2 Creative Chicks

Great card with lovely colours. Thank you very much for joining our challenge at Creative Card Crew.
Hugs, Yvonne

What a cute card!! Thanks so much for participating in our LEMON SHORTBREAD challenge!!! Can’t wait to see you participate again in our next challenge!!
Deanne at A Little Bit O’ Paper

stunning wonderful eye catching card. love your colouring and blending and layout and ohhhh everything.

This card is so beautiful! WOW!!!! Thanks for linking up with us at leinzlovetearbearschallenge.blogspot.com. ANYTHING GOES

What a lovely card. The colors and the details are beautiful. Thanks for playing with us at Crafting with an Attitude :) xx Mari

Clever! Love it! So glad you came Through ‘The Craft Room Door’ to play! Can't wait to see more of your talent!
Hugs,
Karen C

This is gorgeous!! Loving the pretty colors and so beautifully designed.
Thank you so much for playing along in my Let's Color Linky party, hope to see you there again soon!

Gorgeous!! Love everything about your card. The dimensional images are wonderful. Love the background. Thanks for joining us at Twisted Thursday.
Hugs Pat

WOW this is stunning!!

Very pretty and I love the 3d effect. Thanks for sharing with us this fortnight. Lisa DT CCC Digi Creations

Fabulous card for the Chinese New Year.
Thank you for sharing at Allsorts 'CAS' challenge this week and good luck x Susan x

Thanks so much for entering your lovely card into our 'Anything Goes' challenge at Bugaboo Stamps' Catch the Bug Blog. Good luck in the draw, and please join us again soon.
love
Jen L
Bugaboo DT

This is just fabulous! All the little details and your layered images are wonderful!:)
Thanks for sharing it over at 2 Creative Chicks!

Pretty background and I love the 3-d stamped images.

Thank you for playing along with us at ArtByMiran! Good luck!
Nick

Super cute card!! Love how you popped up the monkeys! Thanks for linking up with us at leinzlovetearbearschallenge.blogspot.com. ANYTHING GOES
DT-steph