One More Valetine's for Today

I wanted to get one more Valentine's card posted today. I'm watching the news, watch the birds eating the seed I refilled and watching for snow. We had a little snow shower... where is all the snow!! :D  I want snow LOL!! That will be it tonight. I'm going to get this post posted, do some work on Etsy and hopefully get some coloring done too! :)  Oh... and watch for snow! LOL

Alright... on to the second Valentine's card for today.. the third card in my set of five listed on Etsy :) 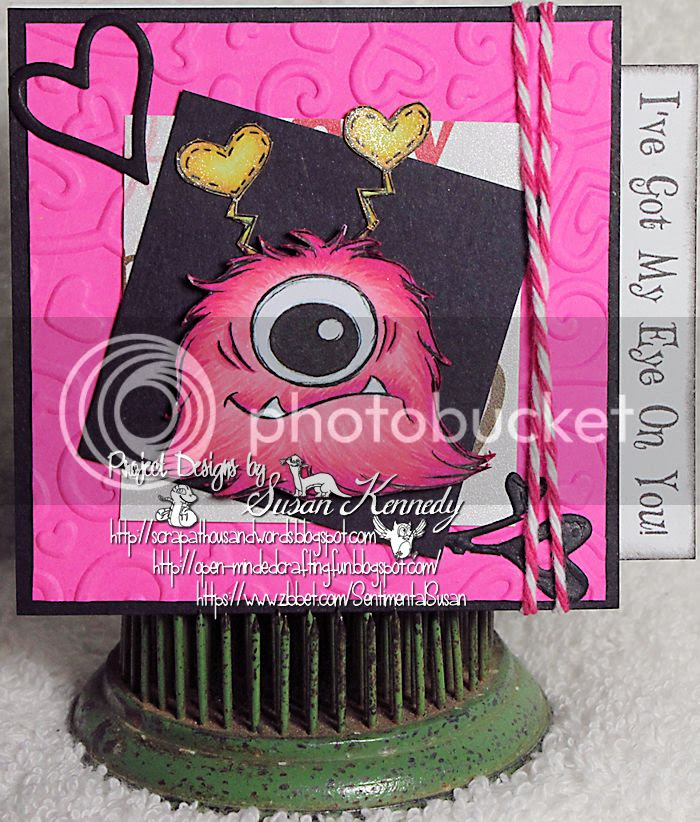 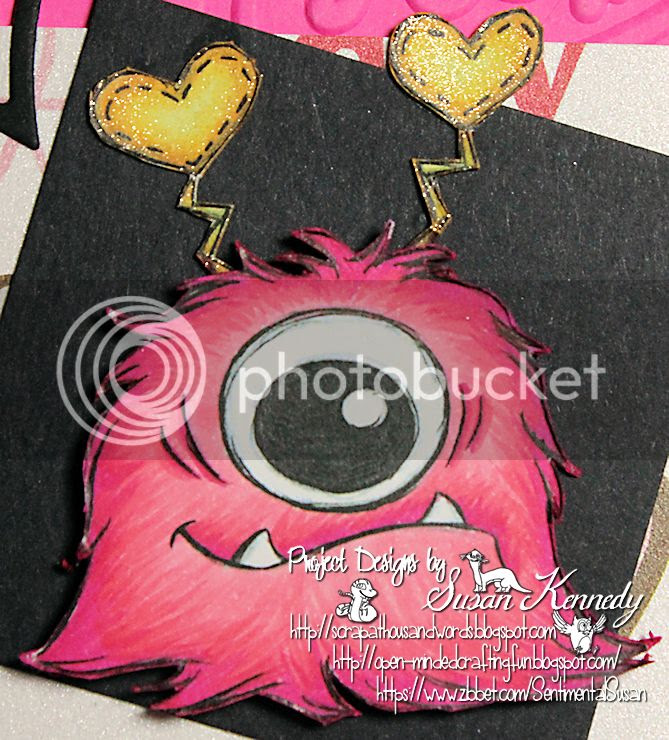 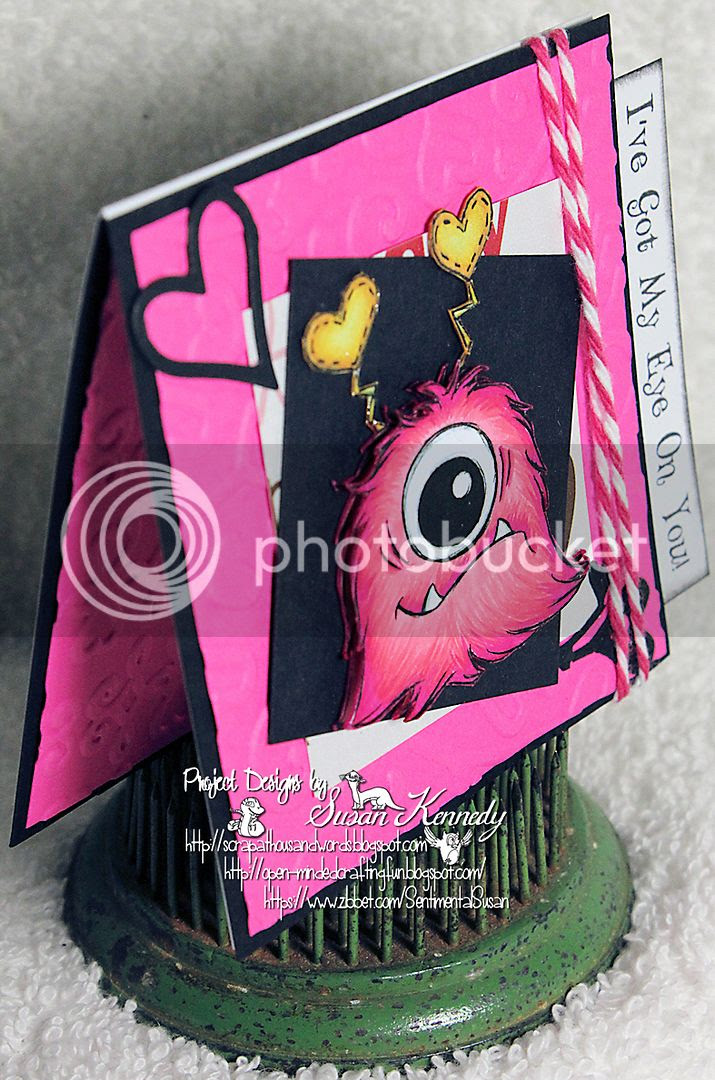 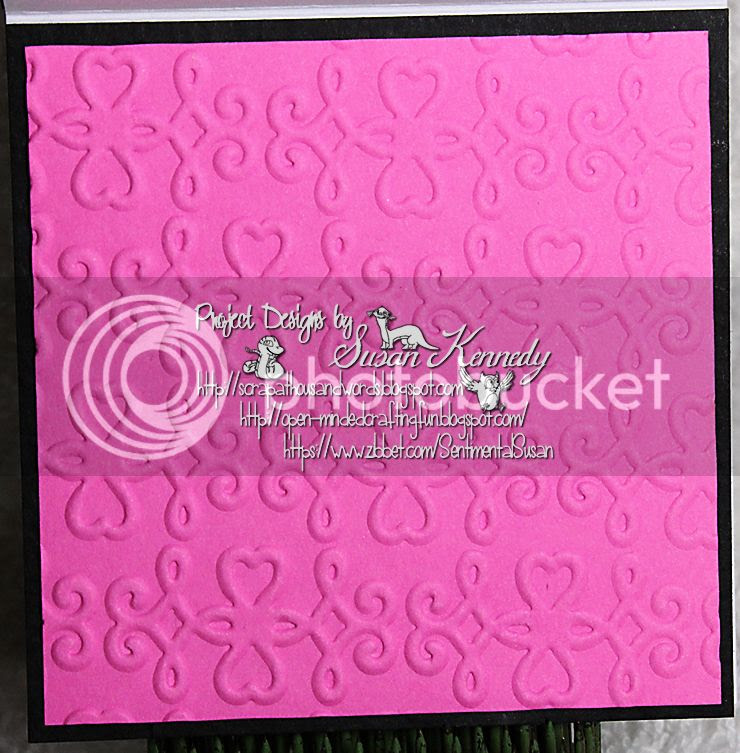 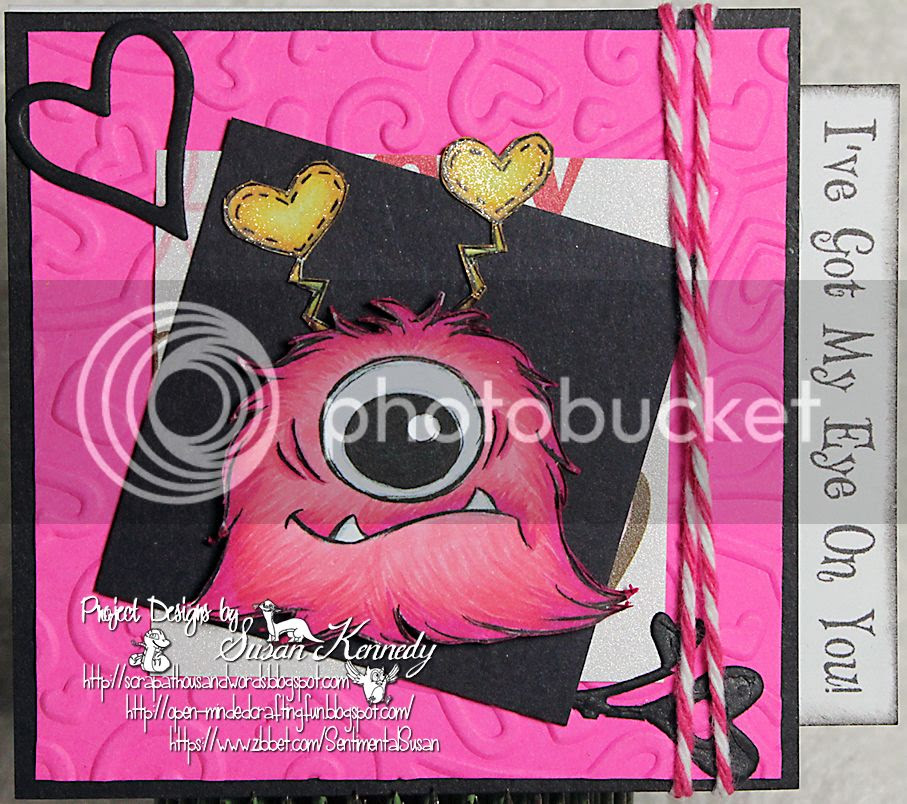 For this little pink and black Valentine's I used one of the monsters in the Valentine's Fuzzy Monster Set at Drawn With Character. I did a bit of layering on the image. I colored with my Copic markers. I've used some embossing on the inside and outside and some die cut hearts. Just a bit of patterned paper from my scrap stash. I also added a bit of twine. The sentiment was created, printed and then inked around the edges. I used a bit of Wink of Stella on the antennae.

Well this just makes me smile. I LOVE that silly guy, and the greeting is perfect here. Love the colors you used too. So glad you could play with us once again at
Mod Squad Challenge

Way adorable! WOW!!! I love the pink and your embossing. Thanks for linking up with us at leinzlovetearbearschallenge.blogspot.com. Anything goes, Win a Tear Bear.

Oh...how fun and cool is this! GREAT take on the challenges! So glad that you join the fun over Simon Says Stamp Wednesday “Create with Critters” Challenge!

Very cute card. But I am curious about the challenges. Why are you submitting to so many challenges? I counted 38 challenges that you submitted this one project to. I have never submitted to a challenge before. Just wondered if that was common to submit to so many.

Beautiful embossing and love your one eyed monster.Thank you for joining us at Aud Sentiments challenge good luck Ginny ♥
Aud Sentiments
My Blog As I do Rodos

Cut It Up Challenge Blog said...

I found the snow you're looking for! (Or should I say it found me!?!?)

I love the sentiment you chose for this adorable image! :) Thanks for joining us at Cut it Up for our Love is in the Air challenge!

Thanks for sharing your amusing card with us MAWTT. Gave me a smile! Good luck and we would love you to join us next time. Christine DT xx

Another adorable card! Love the embossing and fun little monster! Thanks so much for sharing again in my Let's Color linky party!!

This is such a fun Valentine! That little guy is adorable! Thanks for sharing with us at TTCRD!
Katrina
ScrappyHorses.blogspot.com

Your card is absolutely fab... the monster is great and I love the sentiment, it goes perfectly with the image... thanks for sharing it with Crafty Friends... good luck in the draw and hope to see you next time, Hugs Diane Louise (DT)

Adorable monster card! Thanks for joining in at Mod Quad~

wonderful card, I love this monster, thank you for joining us at Artistic Inspirations challenge

a nice card.
Thank you for joining us at CCC.
Greetings Geesje

So made me chuckle what a fab image. Thank you for joining us at Where the Heart is. Helen DT

Adorable monster and in pink too! Thanks for joining us at CCC Digi Creations.
Amy-DT

You made a very amusing card! I love it!
Lia DT S4F

Beautiful and fun card! Thank you for joining us at Stampartpapel Retarte#68
Alexandra Dt

What a fun card. Thanks for joining us at Aud Sentiments. Julie T

What a cute little monster, thank you for joining us at Crafts Galore Challenge for our ‘Anything Goes’ Challenge, hope to see you again. Emma DT x

This is the cutest monster ever! I love the embossing you added to texturize the paper too. Thanks for joining us at My Sheri Crafts.

Hi, beautiful card, in potworku would normally fell in love
Thank you for taking part in Scrapping4funChallenges
AgnieszkaDT

a very nice card.
Thank you for joining us at Creative Craft Cottage.
Greetings Geesje

A great card - thanks for joining us at the Sisters of Craft Challenge.

Great card. Thanks for joining us at That Craft Place, Nicola X

What a fun card. Thanks for joining in the challenge at That Craft Place and good luck.
Julie x

lol...what a great Valetine's card! The little monster is too cute. Thanks for joining us at Scrapping4fun
Tina dt

What a great card! I love your color choices and love the image. Great coloring! Thanks for joining us at Aud Sentiments for our “Anything Goes” Challenge; I hope to see your work in our future challenges too!
Jennifer, DT